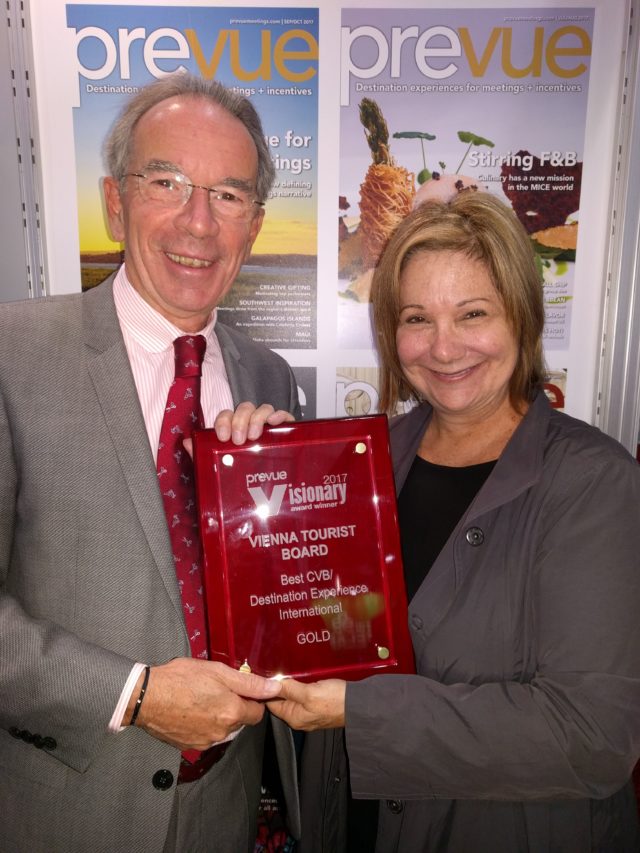 Laurel Herman, President and Editorial Director of the Prevue Magazine, states in her recognition: “Our readers, who are meeting and incentive professionals as well as Advisory Board for our Visionary Award, voted again, as in the previous year, for the Vienna Convention Bureau to be the best meeting destination support in the international market. This award is a great testament for the entire team of the Vienna Convention Bureau and distinguishes you as an industry leader in the meetings and incentive field”.

More than 38.000 readers have been invited to vote for the Prevue Visionary Award. The Visionary Award recognizes outstanding client orientation and service provision by a convention bureau. Prevue Magazine is one of the leading Meeting Industry Publications on the North American market. It provides corporate meeting and incentive planners with insightful group experiential and destination coverage.

The Award Winners have been announced at IMEX America, October 10 to 12, 2017 in Las Vegas.

Christian Mutschlechner, Director of the Vienna Convention Bureau, adds: “We are more than happy that the readers of Prevue voted for the Vienna Convention Bureau and that by their support, we achieved the first place in this category again. It recognizes the strong and ongoing effort of my whole team to deliver best service to our customers planning events in Vienna.”

MCI transforms for the digital age

MCI transforms for the digital age