Junior Chamber International (JCI) has selected the Estonian capital, Tallinn, as the host site for the group’s 2019 World Congress. With more than 5,000 delegates expected, the event will easily set a new record as the largest conference the nation has ever hosted.

The 5-day gathering, which is slated to take place during the last week of October or the first week of November, will include over 190 hours of training sessions, seminars, workshops and keynote speeches, according to the hosting organisation, JCI Estonia. There are also plans to involve other Estonian cities and regions in the programme, namely the university town of Tartu, the seaside resort community of Pärnu, and southern Estonia’s Viljandi County.

“The Estonian Convention Bureau very much appreciates the enormous effort carried out by members of JCI Estonia to bring the congress to our country, in particular the creative thinking they put into finding suitable venues,” said ECB’s Managing Director Kadri Karu. 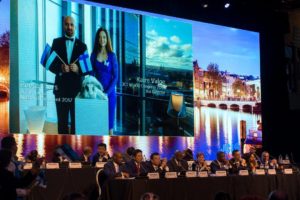 Karu noted the enormous impact the 5,000-strong congress is expected to have on the local meetings industry, especially given the relatively small size of the host city. Tallinn currently has only 7,300 hotel rooms.

Alongside the Tallinn event, a trade show will be held to give local and multinational companies a chance to introduce their products and services as well as create business contacts. Other business events, sightseeing trips and a cultural programme are also planned.

Porsche chose Croatia as one of their Porsche Travel Experience destinations