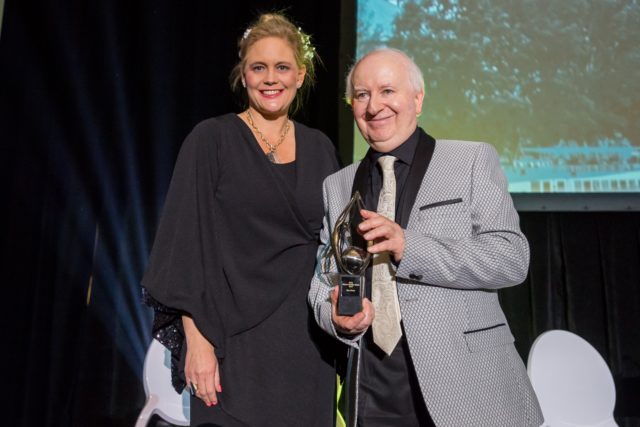 Announcing the award, ICCA President Nina Freysen-Pretorius said: “Tonight we honour a recipient who is a true global citizen, personally known and deeply respected by ICCA members from every region of the world, and from every sector of our business. Modest and self-effacing, yet hugely ambitious and successful, he has turned a family enterprise into a powerhouse global brand, whilst retaining the warm, friendly culture that made it special to begin with. He has been a close partner and dear friend of ICCA for three decades, and ICCA members everywhere know that their business success is at least partly due to the work he has done to elevate our industry by creating amazing tradeshows where we can project our brands and build relationships with our clients and partners.”

The ICCA Moises Shuster Award is ICCA’s most prestigious honour. The Award is given to an individual nominated by the ICCA Board most, but not every year, in recognition not only of their inspiring business success and leadership in the international meetings business, but also for their important contribution towards ICCA’s development and success. It is named after one of ICCA’s “founding fathers”, a true visionary and pioneer in the early years of the international meetings industry, and one of ICCA’s earliest Presidents.

Past honorees of the Award that carries his name comprise a roll-call of industry champions and ICCA ambassadors from around the world: Anne Wallin Rodven, Christian Mutschlechner and Martin Lewis from Europe, Arnaldo Nardone and Greg Ortale from the Americas, Connie Cheng and Anthony Wong from Asia-Pacific. Past ICCA Presidents such as Pieter van der Hoeven and Tuula Lindberg have been honoured, as has PCO pioneer Gideon Rivlin. Very sadly, just before the Congress started, another past honoree and IMEX icon, Paul Flackett, passed away after a long illness.

Ray Bloom, IMEX Group Chairman, comments: “I am privileged and humbled to receive the Moises Shuster Award from ICCA and to be included in the list of esteemed industry leaders who have received this award before me. Thank you to the entire ICCA Board for this honour.”

About Flackett, Ray Bloom, chairman IMEX Group, said: “Paul has been by my side as a friend and in business for over 30 years and was an inspiration to us all in how he conducted himself throughout his career, in particular the humour he brought to us all. I know that he will be greatly missed by all who knew him and our thoughts are with his friends and family.”

With Bloom’s award, and including that of Tom Hulton in 2011, unusually one company – IMEX – has now been recognised three times over the years.

As well as the award itself, ICCA is donating 1,000 EUROs in Ray Bloom’s name to one of his favourite charities, “Overcoming Multiple Sclerosis”.