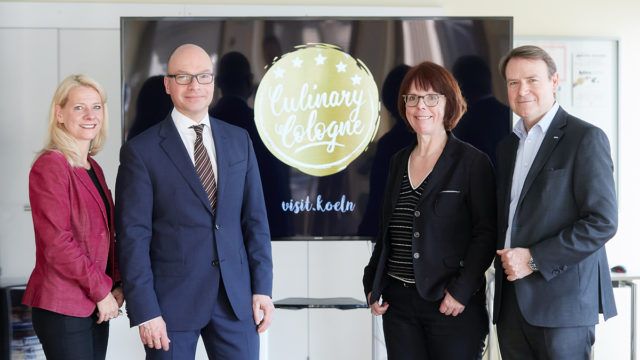 A new study published by the tourism consulting company dwif confirms the increased value creation that tourism brings to Cologne. “In Cologne, tourism is a strong cross-sectoral industry” explains Elisabeth Thelen, Chairwoman of the Supervisory Board of KölnTourismus GmbH. “It benefits not only related sectors such as hotels, restaurants and the retail trade but also numerous service providers and suppliers from a great variety of business areas.” Thelen emphasizes the relevance of the tourism industry for Cologne: “High-quality tourism in Cologne is good for the guests as well as for local companies and the local population.”

“The visitor figures, which have once again increased significantly, demonstrate that Cologne continues to be an attractive destination for business and leisure travellers from Germany and abroad,” says Josef Sommer, CEO of the Cologne Tourist Board. “The remarkable increase in visitors from abroad testifies to Cologne’s huge appeal as a travel destination. As trendsetters and networkers, we will work together with the relevant players to further enhance the quality of Cologne as a travel destination, thus helping to shape the positive image of our city.”

Cologne’s congress and convention market in 2017

The event market in Cologne continues to develop in a positive direction. According to the current TagungsBarometer (Conference Barometer), a total of 49,521 events (+1.8 per cent) with 4.003 million participants (+4.7 per cent) were held last year. In addition, the number of event locations increased to 174 (+5) in 2017. At the beginning of this series of market research surveys of the convention industry, which have been conducted since 2009 by the Cologne Convention Bureau (CCB) in cooperation with the Europäisches Institut für TagungWirtschaft (EITW), 41,500 events with 3.13 million participants were counted. By 2017, the number of participants had increased by almost 30 per cent.

Organizers of corporate events continue to top the list of conventions and congresses. Banks and insurance companies are still the most important sector in this category, followed by medicine and pharmaceuticals. The EDP sector occupies third place, having surpassed the communications sector for the first time. The USA is rapidly gaining ground among the international source markets. Together with the UK, it now occupies first place among event organizers from abroad. The Netherlands, Switzerland and Austria follow after a considerable gap. Most of the events have their organizers in Germany.

The Cologne Convention Bureau (CCB) is celebrating its tenth anniversary this year. The CCB is the city of Cologne’s official convention office. Integrated within KölnTourismus GmbH, it was founded in 2008 in order to market Cologne as a venue for conventions and congresses. In addition to promoting the city’s existing facilities such as event locations, hotels and infrastructure, it also publicizes Cologne’s special expertise in the areas of science and business. The CCB is supported by a strong network of approximately 150 partners. In the past ten years it has cooperated with service providers from the tourism sector and the science community to attract a large number of congresses to Cologne.

The further expansion of Cologne’s hotel market has been a topic of discussion for quite some time. In this connection, there has been a call for more bed capacity to be offered in the luxury segment. In order to provide this discussion with a foundation and support decisions about further development, a cooperative project was launched by the relevant players, including Cologne’s Chamber of Commerce and Industry (IHK), the Cologne Tourist Board, Koelnmesse, Dehoga Nordrhein and the KölnKongress. The group has now published a brochure that addresses this issue. The publication reviews the development of Cologne’s hotel market in recent decades, analyses the current situation and sketches out future challenges.

A central conclusion reached by the group was that Cologne as a tourist destination needs, above all, to coordinate the convention facilities that will be built in the near future as part of the Koelnmesse 3.0 investment program with the resulting need for hotel beds, especially in the range of internationally known hotel chains with four or five stars.

“Cologne’s hotel market has brilliant prospects, but it also needs a hotel development plan,” says Alexander Hoeckle, the Director International and Business Support Section of the IHK. “A hotel development plan makes sense. It would enable us to actively tackle future challenges, strengthen Cologne as a location for hotels, trade fairs, conventions and congresses, and attract more major events and conventions to Cologne in the future. Smaller, privately owned guesthouses and the surrounding communities would also benefit from Cologne’s enhanced competitiveness and growing convention business.”

Culinary establishments help to define the profile of a tourist destination and are highly relevant to travellers. That’s why the Cologne Tourist Board will focus on the culinary facets of our city in 2018 and 2019. “Culinary Cologne” is the new focus topic in Cologne’s tourism sector. Starting now, it will be marketed through various channels that are tailored to specific target groups, such as the completely restructured website, the visit.koeln blog and social media channels. The hashtag #CulinaryCologne will be the binding element. The measures to publicize Cologne’s broad range of culinary establishments will be reinforced by the worldwide activities of the German National Tourist Board (DZT) that are part of its “Culinary Germany” campaign.