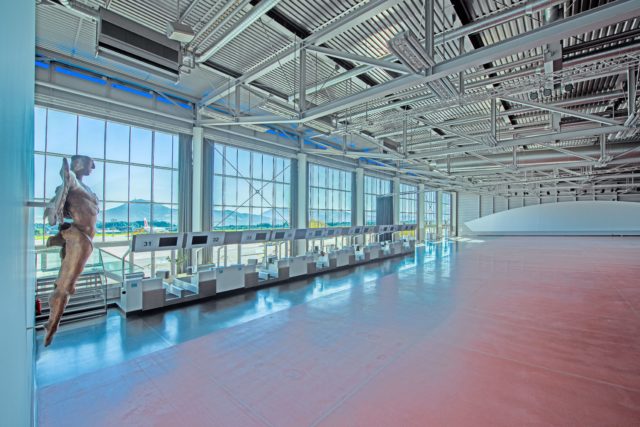 ‘If it’s not occupied all the time, well, let’s put it to another use.’

That was probably the thinking of the management of Salzburg airport, who created an entirely different venue for events. One to which you can fly directly and, following border formalities, find yourself right in the centre of a different world. They proved that airports can be used for various purposes and can also serve as a backdrop for large-scale and demanding events.

In addition to the unusual story, the giant area, with its 3,000 parking spaces and location next to the motorway, are among the venue’s main features of added value. In addition, Terminal 2 is among the largest venues in Salzburg and is suitable for holding a very diverse range of events from exhibitions and trade fairs to product launches. Due to its unique appearance, various parts of the airport are popular for filming, advertising and photography shoots. The terminal is equipped with state-of-the-art multimedia equipment and can meet the needs of the most demanding productions.

Airports usually exceed borders – they offer a sanctuary to travellers and connect the sky and earth. The architecture in such spaces is most often of a generic nature, which is also the case for Terminal 2. The modular and flexible space occupies a generous 3000m2 and it is also possible to sub-divide it into smaller halls which can be adapted for various types of events. It consists of a floating roof supported by attractive minimalist pillars and a glass wall which looks onto the runway. As a whole, it feels light, transparent and functional. It also boasts excellent service areas, including those for catering, and changing rooms for performers.

You certainly won’t go hungry in Salzburg. There are a number of restaurants in the city that are rated two stars or more by Gaul Millau. The most well known is, of course, Ikarus, on the other side of the runway in Hangar-7. The catering services in general are also excellent. The airport is flexible and offers a range of culinary options spanning from today’s popular street food cuisine right up to high-class banquets arranged by selected catering providers in Salzburg (Gli Quattri, Gallbauer, Gassner).

The list of satisfied clients is long. Last year many social events were organised. For example, Skidata celebrated its anniversary with 500 invited guests, and the company Hogast organised a symposium for 850 participants.

The most resounding of all of last year’s presentations was undoubtedly that of Škoda Karoq. The event took place from October to November 2017 and, in that time, it hosted 3,300 Škoda dealers from Austria and Germany. The project lasted 25 days and each day 150 dealers were present. The event showcased all the benefits of the venue where, practically immediately after arrival, it is possible to begin presenting and testing cars without any kind of logistical complications. The project also included all the necessary logistical and daily maintenance of 50 test vehicles, which participants tested on the route to the town of Saalfelden.

Perhaps this unusual venue will also encourage the management of other unoccupied airports in Europe to take advantage of their space for hosting events.