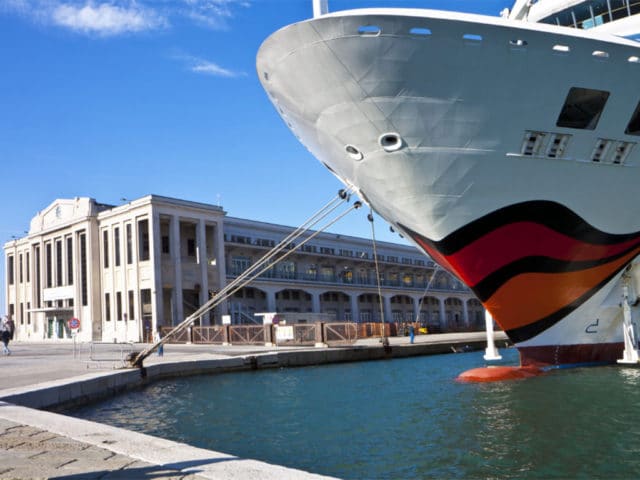 IMPRESSIONS AT THE JUNCTION OF ROMAN AND SLAVIC

With the removal of the border between Slovenia and Italy, which left a huge mark on the recent history of the area, the question arises, whether Trieste will once again become a model of symbiosis. In history, the city mostly lost out on development opportunities in conflicts among Italians, Slovenian and Croats, despite the fact it reached its highest historical importance during the time of cohabitation. Therefore last year’s reconciliation meeting of Slovene, Italian and Croatian presidents in Trieste is not only a symbolic act but a step towards a different future for the city. Such messages are important since Trieste became a sort of dead-end of Italy. On the newly set foundation, a new development of the city is beginning, based on the EU paradigm of the free flow of people, goods, services and capital.

Trieste is defined by the harbour

The image and development of Trieste are defined by the harbour, but its soul stems from the Karst hinterland. To understand the history of Trieste it is key to know that it was a part of the Habsburg Empire since 1382 and is therefore closely connected to the history of Slovenes, Croats and other nations of the monarchy. During the Venetian rule in the Adriatic until the 18th century, it didn’t develop much and was seen as a less important port. This is the period when the infamous feud between Venice and Trieste started. In 1719 Trieste became a free port and with it, the development of the city sped up. With the completion of Vienna – Trieste railway in 1857, it became the second most important city of the monarchy, a kind of mirrored image of Vienna. During this period it was the second-largest city in the monarchy, in terms of Slovenian population.

It also attracted other nations and was the most cosmopolitan city of the region, which constantly attracted new immigrants. From this period the largest Jewish synagogue in Europe, Serbian and Greek Orthodox churches and an Anglican church in the city centre can still be seen. The Theresian period left the biggest mark on the architecture of the city and most of the buildings concentrated around the old port and the main square “Piazza dell Unita”.

Trieste has great natural conditions to prosper in the meetings industry, which it already took advantage of many times in its history. It is defined by Karst, the limestone plateau above the Trieste Bay. An incredible variety of landscape at the juncture of Adriatic, Alps and the Dinaric plane, a number of Karst phenomena and rich cultural heritage is an excellent starting point to developed incentive congress programmes. An additional motivation of congress organizers are the favourable climatic conditions. Trieste was historically always a transitional area and linked the Mediterranean and Alpine countries. Due to the mixture of influences the entire area is colourful and diverse. The results are still visible in the colourful and diverse culinary offer.

The geographic position of Trieste enabled good accessibility. The city is connected with the main European motorway corridors. The railway infrastructure is solid and with the Italian rail system one of the most developed in the region. The worst part is air accessibility where the city is dependent on nearby airports of Ljubljana and Venice since Trieste airport offers few flights. The airport is linked to about 15 destinations with 12 airlines. The city of Trieste has a good communal infrastructure and enables a high quality of living if we don’t consider the highly industrial areas around the new harbour. On the quality of living scale in Italy it ranks very high.

Trieste is a world coffee capital

Some nostalgia can be experienced on a tram ride from Opicina to the city centre. The city’s traffic is very manageable and slightly less chaotic than in other Italian cities. The tourist industry shares the destiny of the city. At the moment we can say it’s in a state of hibernation. Top-notch culinary offer can mostly be found in the Karst hinterland rather than in the city centre. The cafe shop offer is above average. Among other things, Trieste is a world coffee capital. The city is home to prestigious brands like Illy, Hausbrandt, Cremcaffe, Qubik, Excelsior Caffè. It’s no wonder Trieste is home to many top-notch cafes which go wonderfully with the Teresian architecture. I think coffee from Trieste is among the best in the world and coffee break a world-class experience. The main reason to visit is shopping, which used to drive us to Trieste in times of socialism and is less important nowadays. The once unforgettable shopping trips to Trieste have been replaced by giant shopping centres near every larger city in the region.

The convention bureau Promotrieste is one of the oldest in the region, it was established in 1985. Today it has 45 members 20 % public and 80 % private institutions. The congress consortium managed the central convention centre “Stazione Marittima” until recently, but lately, the management of the company was taken over by the company managing the Trieste passenger terminal (Trieste Terminal Passeggeri), which has big plans for it. The heart of the offer “Stazione Marittima” on two floors offers a multifunction space for over 1000 participants. In the past, the centre was filled to the brim by scientists and researchers of numerous institutions, which reside in Trieste and its surroundings. Among others, there is an International Centre for Theoretical Physics and an Area Science Park with Sincrotrone in Basovizza. The convention centre is slightly outdated today, so a new part with a multifunction area for a 1000 participants aimed to be finished in 2012 will be very welcome. “Molo 4” is foreseen as a new port for large cruise ships as well as a convention centre. Large parking spaces near and around all-important hotels and institutions are commendable

Hotel Savoia Excelsior Palace, opposite the convention centre, celebrated its hundredth anniversary this year. Most of us agree the hotel is something special after its full 3 years renovation. It’s the embodiment of Trieste and its glamour. The hotel is excellently equipped and offers one of the best hotel convention centres in the region. Nine halls can host up to 600 participants with the largest up to 300. The culinary offer is extraordinary; especially thrilling are the tidiness of the hotel and the professionalism of the staff.

Why is Trieste an excellent and top-notch congress destination?

Near the Hotel Savoia is NH Trieste, which is a smaller conference hotel with congress capacities for 180 participants. Near the main square Piazza dell, Unità d’Italia is the historic Grand Hotel Duchi D’Aosta, which doesn’t have congress facilities but rounds up the offer of smaller boutique hotels in Trieste quite nicely. Among the congress facilities, the exhibition centre in the suburbs is worth mentioning. It offers 10,000 m2 exhibition space and a smaller congress centre in 10 halls. It is most known for its TriestEspresso Expo, OlioCapitale, and soon the first and most important international Fair for the Prosecco Sparkling Wine will be held in 2012.

Trieste doesn’t have issues with venues for social events and receptions. From the period of industrial growth many large halls, hangars and other spaces are now used for events. An excellent event venue is the renewed old fish market which serves as a multipurpose exhibition and event centre. It is located near the convention centre. For larger receptions the renewed port warehouse Molo 4 is available. Now it’s mostly used for concerts and as a multipurpose event space. As a special events venue in the surroundings the castle Miramare lies near Grignano. It was built by Emperor Maximilian I as his summer residence. With a wonderful park, it is a perfect space for protocol receptions

The congress shape of the city gives the impression of hibernation. Due to numerous scientific institutions, the meetings industry is functioning, but not developing. It seems the huge congress potential of the city is unexploited. The city is pleasant and tidy, but it seems economically and socially stagnant for decades. This can mostly be seen in the image of the destination, which needs a serious boost considering the cosmopolitan nature of the city. The convention bureau appears somewhat rusty so maybe the abolition of the border can offer a new opportunity to cooperate with the hinterland in Slovenia. Trieste used to be one of the leading cities in Europe, which attracted business and was an example of multiculturalism. Today the meetings industry shares its faith with the city’s, despite a number of development opportunities. Globalisation and border abolition enable Trieste to turn to its hinterlands. This can contribute to the revitalization of the meetings industry if there is interest on both sides of the border, which may be gone now, but is still present in the minds. In cooperation with Ljubljana, Trieste could become a large player in the meetings industry of the broader European space.

The Mediterranean climate, unspoilt Karst hinterland and extraordinary diversity of the landscape contribute to high attractiveness of Trieste and surroundings. The Karst hinterland with its extraordinary cultural heritage poses a contrast to the city which demonstrates its former cosmopolitan spirit at every step. The mixture of cultures left its mark on the city and makes the meetings industry that much more interesting.

Trieste was an important traffic juncture and main port of the region for centuries. Traffic infrastructure is still good, but air access is poor. The most sensitive historical centre is neat and tidy but the feeling of industrial degradation around the harbours is less pleasant. General feel and quality of living are adequate.

The trump cards of tourism are numerous cafes, bistros and restaurants. Sports and recreation offer is well developed. The city offers some great hotels and a number of smaller boutique ones. Due to the demographic situation and the abolition of the border it regressed somewhat in the once leading shopping and entertainment area, which can now be found on the Slovenian side of the border.

Despite the oldest convention centre in the region Trieste lost its previous high position on the international market. The convention centre is in dire need of renovation. Hotel Savoia is the flagship hotel others don’t reach its level. The agencies are strong, but Trieste lacks some really strong PCO agencies and a more innovative incentive offer.

The meetings industry of Trieste is actually fine, it’s just missing something to make it an above-average congress destination. The city is safe, tidy, has a good price to quality ratio, the locals are hospitable and professional. The something extra that’s missing is a more attractive offer, which would take advantage of the hidden potentials of Trieste.

Today, Trieste is mostly known for its coffee, rather than the meetings industry. The geo-political location could make Trieste a leading Adriatic congress destination, yet it is now being overtaken by less accessible and geographically located destinations. A solid infrastructure is a good foundation for development. The image of the city on the regional and world market needs to be improved. When key stakeholders on both sides of the border realize the potential of the city, it can become much more important than it is today.

Trieste is the second name for coffee. In Trieste coffee is great and is the first on the daily schedule. Espresso from Trieste rules. And to quote the coffee doctor Ernesto Illy, “cappuccino is the female side of coffee, espresso is for men”. There are over 50 coffee companies working in Trieste today.

Destinations that can host over 2,000 congress attendees.