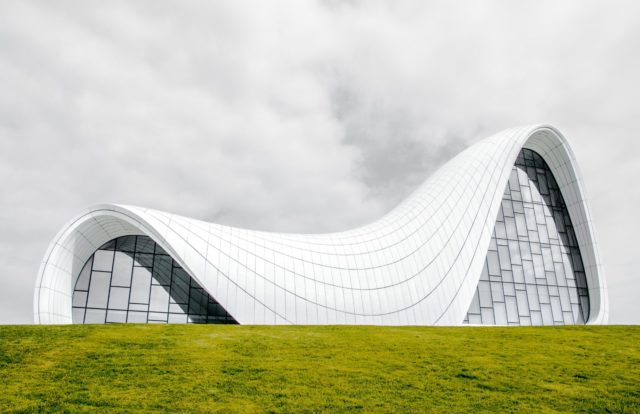 The Heydar Aliyev Centre has been Baku’s main architectural icon since 2012. It was built to honour Heydar Aliyev, the Azerbaijani leader during Soviet times, from 1969 to 1982 and the president of Azerbaijan from 1993 to 2003. Located near the city centre, it stands as an integral part of Baku’s urbanistic makeover. The city’s main traffic artery runs right next to the cultural centre, meaning everyone coming to the city from the airport is able to see it. I mean, how could you really miss it?

In addition to the main conference/concert hall, the Centre also houses a library, different exhibitions on multiple floors and even a collection of rare cars. Many come to Baku just to see the giant structure and admire its proportions. The building is made up of three main blocks, each serving its own purpose, but forming a completely unified whole. The foyer opens up views to all of the floors in the three blocks, where different exhibitions take place. It reminds me of slicing a cake and revealing all of the layers. The foyer is where you will find a small coffee shop and occasional exhibitions.

The architecture that made Zaha Hadid famous is timeless and iconic. Her work is intriguing and it is impressive how she manages to shift the boundaries of what’s possible. The result? A building of superlatives, where function follows form and not the other way around. It does a perfect job of drawing people in, as it’s based on organic shapes and rounded corners, something that the human eye immediately registers as pleasing. Arguably the boldest architect in the world and her team managed to create an exceptional building.

The Auditorium is the heart of the building. Wooden arches follow the round lines of the ceiling and show strong expressiveness in designing undulating surfaces. It’s as if the massive oak beams are gently hugging you, enchanting you with top-notch acoustics. In addition to the main conference hall with a 1000-participant capacity, there is also another multi-purpose hall that can be split into three smaller halls giving you space for 1400 participants.

There are many ways to get to the centre, but we advise you to tell the taxi driver not to take you all the way up to the entrance. This way, you will have a chance to walk up the beautiful terraced slope and admire the white palace that overlooks the park. Its sloping white panels are a great contrast to the perfectly maintained green grass. The white alien is not alone anymore, as three years ago another iconic building was built right next to it. The more masculine architecture of the Baku Convention Centre is another strong contrast that is provocative and extremely attractive. They are connected by a central square, where wavy lines keep the inside always connected to the outside.

If you are a car enthusiast, you will be itching to take the elevator down to the basement of the Centre, where there is a spectacular collection of cars ranging from models produced at the end of the 19th century to modern supercars like the Bugatti Veyron. It’s a great excursion into the history of the automotive industry.

A comprehensive exhibition of musical instruments

The Heydar Aliyev Foundation’s several year-long endeavours to collect unique musical instruments from a variety of sources resulted in the Musical Instruments: Unity and Diversity exhibition. The exposition boasts up to 200 musical instruments dating from the 18th to the20th century. The exhibits represent 31 nations.

Instead of a conclusion

The building is an awe-inspiring special venue that has been put to great function. It’s an incredible architectural feat that has the power to strengthen the story of every event. It’s an iconic location that your participants simply won’t forget.

Who was Zaha Hadid?

Zaha Mohammad Hadid was a British-Iraqi architect, who became the first woman to win the prestigious Pritzker Architecture Prize in 2004. She was also awarded the Stirling Prize twice and in 2012, she was made a Dame by Elizabeth II for services to architecture. Zaha will certainly go down in history as one of the best architects there ever was.