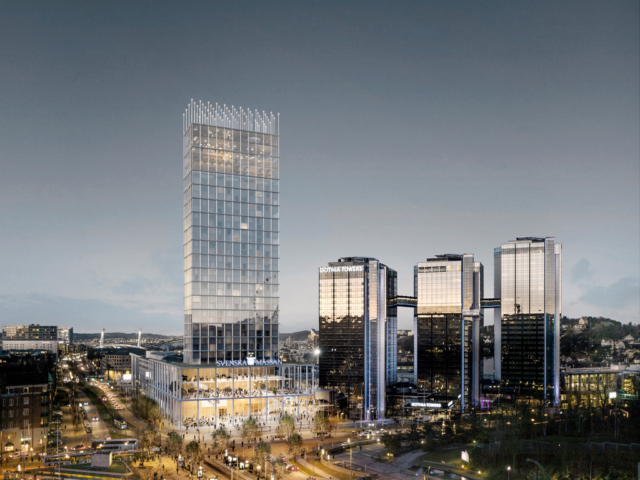 The Swedish Exhibition and Congress Centre / Gothia Towers is one of Europe’s largest integrated meeting venues. Now this global venue will become even bigger. This year an architectural competition was held to design a fourth tower with spectacular top floors, a new multi-storey entrance and a terrace. The winning design from Tham & Videgård Arkitekter creates an open environment in which food, culture and events share the space with meetings and trade fairs throughout the venue, adding more dimensions to the overall visitor experience.

“The winner has presented a magnificent tower which is significantly taller than the existing Gothia Towers and will be a new landmark for Gothenburg,” says Carin Kindbom, President and CEO of the Swedish Exhibition & Congress Centre / Gothia Towers. +One includes a new inviting entrance which smudges the boundary between outdoors and indoors. “We’re immensely proud to have this opportunity to further strengthen our international appeal and generate new value for the city of Gothenburg.”

The assessment team included representatives from the Swedish Exhibition & Congress Centre Foundation, Architects Sweden and the City of Gothenburg. Other expert representatives also took part in the evaluation process, which started when the competition was announced nearly a year ago. The contestants had the task of designing a fourth tower containing about 400 hotel rooms, meeting spaces, restaurants, offices and a terrace with room for up to 1,200 guests to mingle.

“The selection and adjudication process was thorough and exacting, and four outstanding entries went to the final,” says Roger Holtback, chairman of the Swedish Exhibition & Congress Centre Foundation. “The contestants’ task was to design an integrated and innovative building of high quality in terms of both architectural design and practicability, with clear ties to our history and urban environment. The choice fell unanimously on Tham & Videgård, to whom we extend our warmest thanks and congratulations.”

“Our vision is to become Europe’s most attractive venue by offering the best overall experience,” says Carin Kindbom. “We need to evolve continuously to keep up with international competitors, and +One will add further dimensions to our comprehensive offering.”

Work on the local development plan is expected to start in 2020. The four finalists’ designs will be exhibited to the public in the Swedish Exhibition & Congress Centre’s new entrance on Skånegatan from 15 to 16 October between 12:00 and 19:00.