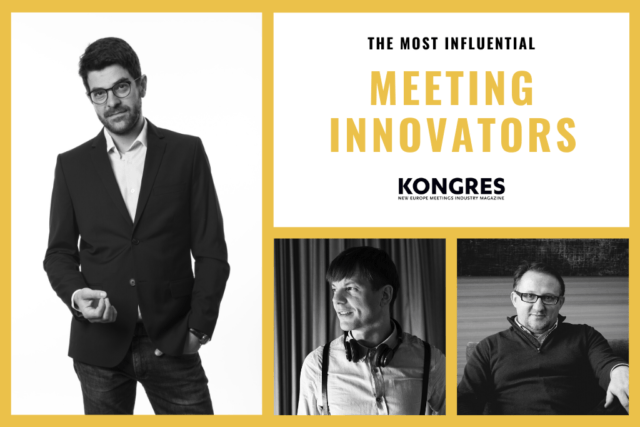 The meeting innovators with the most votes are:

Davor Bruketa together with Nikola Žinić founded Bruketa&Žinić OM agency in 1995, and renamed it to Bruketa&Žinić&Grey after becoming part of Grey Group in 2017.  As Bruketa&Žinić OM the agency won over 450 awards for advertising and design. Advertising Age awarded B&Ž the International Small Agency of the Year 2014 award, and Campaign listed B&Ž among the world’s leading independent agencies. On the global Effie Effectiveness Index B&Ž was ranked second among independent agencies in 2012. Bruketa is also a jury member of many prestigious international competitions.

Founder and owner of the marketing and congress agency Toleranca marketing, Gorazd has numerous years of experience in the planning, preparation and execution of major international trade shows and fairs. Having started his career in Cankarjev dom, where he project-led on fairs such as Infos, Kapital, Bits & Fun, Slovenian Wine Festival and many others, work in his private capacity has given him a long and multi-faceted experience of developing B2B trade shows, the most noteworthy of these being Conventa, Space, Natour and Hot-Rest.


As a board member of Baltiski Aljans OU, Mary Kirillova worked with PracticePanther Law, Sberbank, Deloitte, Audi Motors, British Petroleum, Milan Fashion Week, Gazprom, Lukoil and others. She also launched the Baltic For Events Forum and in the same year she became general manager of the Baltic Event Industry Club. She is also a founder of the Baltic events news blog bestbalticevents.com and of EventCV.com, a global job search for event agencies and customers around the world, as well as a producer at OCTOPUS newspaper.


Anja Rebek is one of the key representatives of the Slovenian event management industry and has been active in the world of communication and marketing for more than 10 years. In 2014 she co-founded FABulatorij, a regional company for event organisation and experiential marketing. Since its inception, FABulatorij has created a highly productive professional team that offers strategic consulting, creative conceptualization and project execution, as well as event management and PR services in the fields of corporate marketing communications and entertainment management.

Boban Milunović is, next to owning the biggest festival in Slovenia, MetalDays, where he is in charge of the entire management and booking, running also 4 other festivals: Punk Rock Holiday, Winter Days of Metal, MotörCity and Overjam Reggae Festival. He spent his whole life in the music industry, from playing in various bands and being a tour manager, to owning a recording and mastering studio, where he handled mastering and production. Boban is also member of Slovenian blues rock band called Stray Train.

A perfectionist, obsessed with the idea of establishing a regional creative hub, the Belgrade Design Week has in global terms become an event without precedent. His work is characterised by an understanding of the creative industries and their importance to the revitalisation of society. This has brought about a changed perception of Belgrade, which Jovan has achieved over a number of years. At the same time the annual event remains a surprise in terms of the innovation in its organisation.

Danica PURG
President of the IEDC-Bled School of Management

Professor Danica Purg is the President of the IEDC-Bled School of Management, Slovenia, and the President of CEEMAN, the association of 219 management development institutions from 54 countries, established with the aim to enhance management development in Central and Eastern Europe. She is also leading the European Leadership Centre (ELC). In January 2015, the Slovene Managers Association conferred upon her a Lifetime Achievement Award in the field of Management. A special chapter about her leadership journey was recently published in “Women and Leadership Around the World”, by Information Age Publishing, USA, authored by Susan Madsen.

Well before finishing his studies Anže was in the business world, first of all with a friend, together with whom they bought and took leadership of a publishing company only to sell it years later and invest in IT. Then in 2008 Anže started a position as a Project Manager in an Engineering Investment Company, where he gained his professional experience as an engineer of energy efficient buildings. The following year saw him become CEO of the most technologically advanced hotel complex in Slovenia and in 2012 he became managing partner of an investment consulting company, dedicating his free time being to his passion of capturing images and motion pictures in the mountains.

Danijela Brečko has over 20 years of experience in the field of professional personal development and leadership. She holds a master’s degree from the Faculty of Arts in the field of personal development and has also published a book on the topic, titled How We Adult Change. She holds a PhD in career planning and the role of education. For more than 20 years, she has been working as an editor for educational programs and as a manager at Planet GV, a business education and consulting firm, and for the last two years she has been developing tools to increase human intellectual capital at the SOFOS Educational Management Institute.

Juraj Holub received the Young Hero in Meeting Design Award and was selected as one of PCMA’s ‘20 In Their Twenties Class of 2016’ for his work as a professional, speaker and writer in many activities that drive meeting design. Juraj is the editor of the Slido blog and contributes to several events industry media outlets. As a public speaker, Juraj Holub applies the meeting design principles to deliver interactive sessions at events such as SXSWedu, WEC, Social Media Week and IMEX.

Newcomers in 2019, voted by readers

Nikola started working as Account Strategist at Google in 2013, but after two years decided that he want to combine his career with his lifelong passion for gaming. In 2015 he switched to ShoutEm, an app development platform in the role of Chief Marketing Officer. After a year he became the Head of Marketing at Nanobit, a computer game developer. In 2015 Nikola decided he accumulated enough knowledge on the subject and founded his own game development company, Good Game Global. Along with gaming, his other passions are the Internet, food, fitness, entrepreneurship and creative people.

Anja is a creative person who likes all kinds of communication and has years of experience in professional management, organization and execution of professional communication processes. She has been with PM for 14+ years, where she manages different media processes, from classic print to modern and more unpredictable web contents and tools. She claims that despite her 20 year-long history in event planning, she still sees each event as a new challenge.