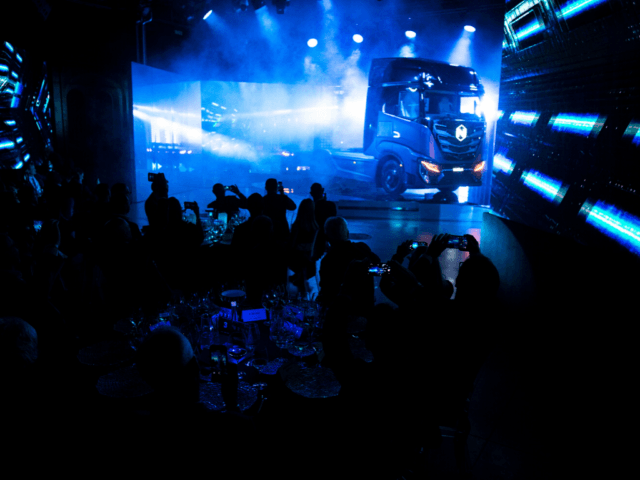 A dinner invitation which alludes to a special and unexpected “unveiling”, in an ideal time machine leading guests towards the mobility of the future, in a new age of sustainable transport.

“3210_Unlock the Next Level” was the concept of the event organised by Filmmaster Events on 2nd and 3rd December in Turin, at Officine Grandi Riparazioni (OGR) and CNH Industrial Village, on occasion of the presentation of the maquette of the new Nikola TRE, the first Zero Emission Truck created by the partnership with CNH Industrial, a leading industrial vehicle manufacturer, and Nikola Motor, an American hybrid truck design start-up.

Following on from the launch of the IVECO S-Way, presented in July with a spectacular event, also created by Filmmaster Events in Madrid, the unveiling of Nikola TRE, which will be on the market by 2021 in the fully electric version and by 2023 in the hydrogen-powered version, marks an important milestone in the history of sustainable mobility. The concept of the event was centred around a set of numbers, “3 2 1 0”, with a dual significance of a “count down”, but also of a code in which each digit stands for something different. “3” as in Nikola TRE, “2” as the two companies – Nikola and CNH Industrial, which have come together in “1” partnership for “0” emissions of the new Nikola TRE.

On the first day, Filmmaster created a surprise event, transforming a gala dinner into the unveiling of a latest-generation Zero Emissions Truck. The occasion was developed in an atmosphere which evoked a space suspended in time, where a hexagonal-shaped mirror structure (alluding to the Nikola brand), inspired by the languages of contemporary architecture, eliminated the heaviness of space, rendering everything lightweight and timeless. Suddenly during the dinner, the structure opened up, like the chrome shell of a “time machine” and the Nikola TRE emerged, as though from the future: the first zero-emission heavy goods vehicle. In this reconstruction, the Filmmaster creative team aimed to transform the heavy goods vehicle into absolute lightness.

“We are really satisfied to have had the opportunity to accompany IVECO, following on from the Madrid convention, at this historic event as well” Andrea Francisi declared General Director and Chief Operating Officer of Filmmaster Events. “It was thrilling to create an event with such a global reach, to communicate that the future of sustainable mobility will soon be here, even in the commercial transport sector”.

On the second day, the same set-up heralding the new Nikola TRE vehicle was re-proposed for an international audience of dealers, sales managers, VIP customers and other institutional guests, at the CNH Industrial Village in Turin. The digital side of the event was also curated: it was broadcast live on the internet on the Iveco YouTube channel, also conceived as a powerful generator of contents published on all official social media channels, amplifying the resonance of the event in an exponential way.