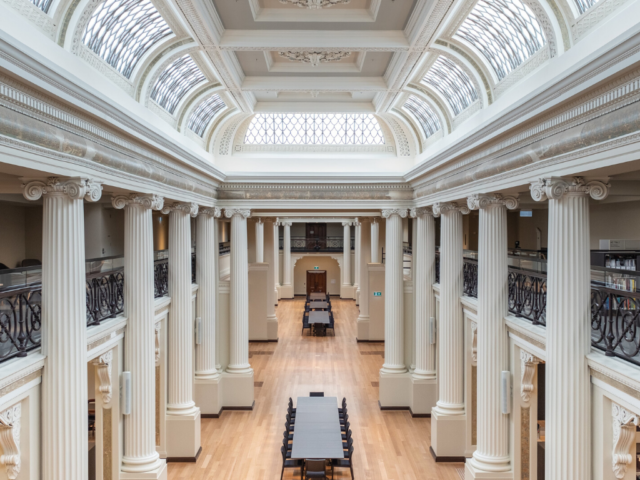 The State Library has officially opened to the public today after its ambitious $88.1m Vision 2020 redevelopment, celebrating last Tuesday night with a grand reception with Victoria’s philanthropic and political powers all in attendance.

Tuesday evening was the first look at Melbourne’s newest events venue, the Ian Potter Queen’s Hall. A grand room built in 1856, closed to the public for 16 years and now restored to its former glory perched above the Swanston Street library entrance. A red carpet welcomed guests through the new entrance and up the marble staircases into the grand Queen’s Hall, met by violinists. The Honourable Premier of Victoria, Daniel Andrews was one of many guests amongst previous Victorian premiers Steve Bracks and Jeff Kennett.

John Wylie, head of the library board announced to the 350 dignitaries excitingly “This is a library party that is the hottest party in town, and that hasn’t happened in 160 years!”
Daniel Andrews announced to the crowd “Tonight we’re here in a tux … talking about the most visited public library in Australia … for that we should be very proud.”

“It has been an honour and privileged to produce this prestigious and important event for the State Library. We’re very proud to be their exclusive event partner, and showcase what Showtime Event Group do best, throw an awesome party!” – Brad Dabbs, General Manager, Showtime Event Group

The opening marks the completion of almost 5 years of planning, building and restoration. Increasing public space by 40%, utilizing classical and modern architecture to create some of Melbourne’s most impressive spaces. Forming a total of eleven unique venues within the library that can cater to any style of event, from conferences to large gala dinners.

“We’re very excited to be able to share these new spaces within the State Library as it quickly becomes the city’s premier events hub. Allowing us to create truly memorable event experiences in some of the most historic and beautiful venues that Melbourne, and indeed Australia has to offer” – Troy Stasinowsky, Head of Business Development, Showtime Event Group.

The new ‘events hub’ at the Library includes;