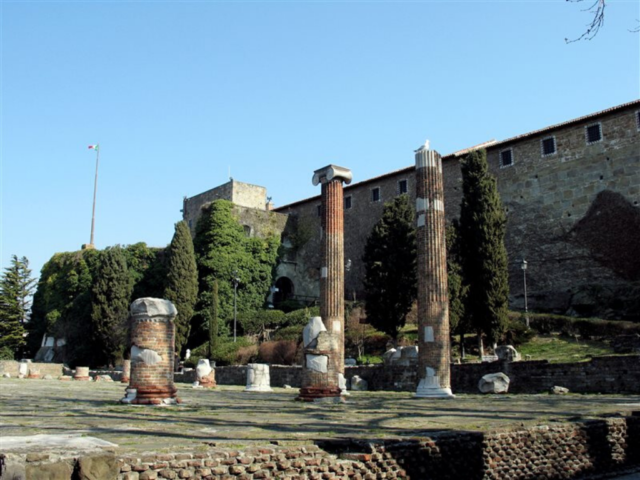 The Castle of San Giusto stands on the hill overlooking the city of Trieste, its gulf and its hinterland. In 1382 the town came under the control of the Austrian Empire, following which the Imperial court ordered the construction of a fortress to protect the town and provide accommodation for its Captain. The building work lasted from 1468 to 1636. It began with the Captain’s House – a fortified residence flanked by an L-shaped tower – which was subsequently incorporated into a triangular fortress with a bastion at each corner.

The Museum of the Castle of San Giusto Armoury is housed in the 15th and 16th century quarters of the Captain’s House. Visitors enter the Museum via the Round Bastion, straight in the historic core of the Castle, that is the late 15th century Captain’s House. The exhibition path begins with an introductory room, where the story and the urban development of Trieste have narrated thanks to old views, historic photographs and a scale model of the early 20th century, which reconstructs the appearance of the city before it expanded in the 18 and 19th centuries. Visitors can then enjoy the 15th-century rooms and the covered sentry walkways, where the Armoury is. Pole-arms (halberds, partisans, corseques, glaives), long and short-bladed weapons (swords, daggers, bayonets), archery weapons (crossbows), long and short firearms (springalds, muskets, pistols) and accessories (powder horns and cartridge holders) are arranged in a display chronicling the development of European weaponry from the Middle Ages to the 19th century.