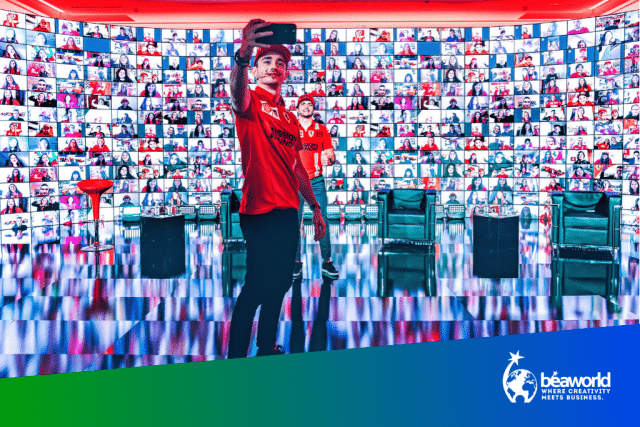 Ninetynine proposed a change of “narrative paradigm” to enrich the image of the Scuderia and its champions. The project was articulated through two immersive-film events, a social engagement strategy, the Global Press Conference and the digital Meet & Greet with connected partners and fans from all over the world. The film events were made in cinematic style with 7 speakers and 8 sets, then deconstructed into pills for social media. The films had an emotional tone and dynamic editing.

An intimate narration gave substance to the hashtag #essereFerrari, breaking away from the classic presentations of sports teams. After the welcome by Mattia Binotto and the ironic confrontation between Carlos Sainz and Charles Leclerc, the event achieved its top moment with the big reveal of the car, anticipated by an introduction by Binotto and concluded with the intervention of John Elkann flanked by 3D animations, in augmented reality, to then triumph in an innovative beauty shot of the new SF21 made with lighting from above as the only source of light. Going beyond the car and simulating the asphalt of the track, they used a system of steady-cam and trinity to obtain a distinctive result. For digital events, the LEMONN division of Ninetynine has developed a multi-platform system for full-live management of over 650 worldwide connections and two live television broadcasts. Charles, Carlos and Mattia saw and answered the questions of journalists, partners and fans, alternating 2 press conferences, 2 live TV shows, one-to-one interviews, a meeting with the partners and the most exciting moment, a unique photo opportunity when all the fans were able to interact directly and literally surround them in a global embrace.

The results, comparing the launch of the previous year, saw a strong increase in all KPIs and massive coverage of the global press: + 70% of views on the site web, + 200% YouTube views, + 69% Facebook views, + 500% Instagram views. Strategy, creativity, innovation, technology and centrality of content were the successful ingredients of this project which saw the involvement of a team of over 150 professionals.