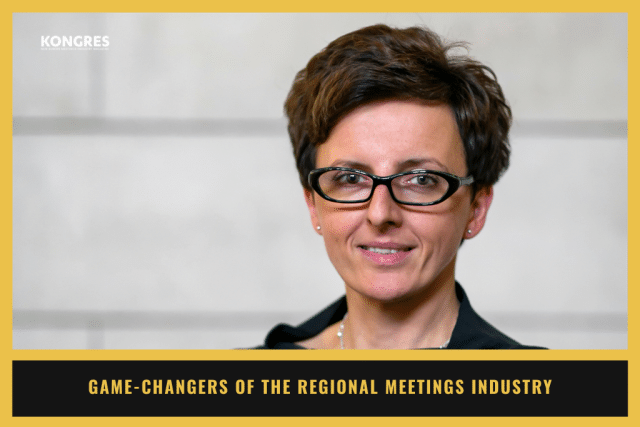 Kongres Magazine talked to Malgorzata Przygorska-Skowron, Manager of Krakow Convention Bureau, who was recently named among the top 10 Most Influential Destination Representatives in 2021. Malgorzata shared her advice for newcomers in the meetings industry and expressed her opinion on the future of events.

Q1: What does the title of the industry’s most influential individual in the region mean to you?

This is a great honour for me and a confirmation of the power and effectiveness of a strong, well-matched team full of ideas, persistently striving for goals, drawing energy and inspiration from all its members. This time our goal was to win the ICCA Congress for Kraków, but I am sure there is nothing impossible for us as far as our dreams are concerned. The gained title also confirms that the direction of our strategy is effective and appreciated by the sector.

Q2: Can we say that you are a newcomer in the meetings industry? What inspires you?

I am certainly no longer a beginner, I have just entered my 10th year at the Krakow Convention Bureau. A lot has changed over the years; in fact, every year brought some important events that we focused on, which made us experienced and enriched with new knowledge. The last two years have shown that you still have to learn; life is surprising, requires creativity, flexibility – and often the ability to anticipate the future. In these difficult moments, I noticed how much I needed to talk to people and authorities. I also follow how other cities deal with the crisis – it inspires me and helps me find the right way for Krakow.

Q3: You have contributed a lot to the development of the meetings industry. What would you say was your greatest achievement so far?

I was talking about changes – this also applies to Kraków itself. The city has changed and developed tremendously over the years, including the MICE offer. I started working just before three venues for large events in our city opened in 2014. They are now regional leaders in their categories – the ICE Krakow congress facility, the TAURON Arena Kraków concert and sports venue and the EXPO Kraków trade fair centre. The meetings industry has been appreciated and recognised as strategically important for our historic city and included in the document: Krakow’s Sustainable Tourism Policy 2021-2028. This is a huge success, and I hope that my team and I have made at least a small contribution to it.

“meetings will survive because the need for them stems from the very nature of human beings.”

Q4: What changes would you like to see in the meetings industry in 2022?

Paradoxically, I would prefer not to see too much change but rather for things to return to the way they were. I wish the pandemic will not leave a permanent mark on the meetings industry, although this is probably impossible. I look at the tourism market from the perspective of a local government official, not an entrepreneur, so it is probably easier for me to talk about missions and ideas. I would like us to continue to be able to cooperate, to think of our cities as a common good. I would like congresses to continue to have the power to change destinations, leaving a lasting mark, a legacy, and contributing to balancing the negative effects of mass travel.

Q5: What is your prediction for the future of meetings?

All of us working in the industry agree that meetings will survive because the need for them stems from the very nature of human beings. Their virtual component will certainly remain with us as meetings will continue to be organised virtually or in a hybrid model. It will depend on us whether we want to move from the couch and get up from the computer to get the experience of reality or whether we will be drawn into the virtual world, with its convenience and savings. We will be able to find out soon when congresses – postponed for two years – are once again organised in Kraków. Although, smaller meetings are quite a nice idea for such a compact city as Kraków is.

Q6: What is your advice for young colleagues making their way in the meetings industry?

I would draw their attention to the most important aspect of this work – teamwork. There is no room for soloists; no one can win the congress or organise it alone. One needs to cooperate with many different types of stakeholders: entrepreneurs, officials or scientists. Everybody is different and equally important in the process of gaining and producing an event, and consequently in building the importance of the meetings industry in the city. There must always be a ‘driving force’, who cares about the congress or meeting. Otherwise, it will not succeed.

“Many people still do not understand what MICE or Convention is or why it is so important that a congress devoted to, i.e., artificial intelligence, was held in our city.”


Q7: Were you more exposed in public after being placed on our list? Do you see this as an opportunity to reinforce the prominence of our industry in general?

The Kraków Convention Bureau operates within the framework of the Tourism Department of the Municipality of Kraków. Thus, as a local government official, it is not often that I have the opportunity to read about myself in the press, especially internationally. This is of great importance in strengthening the importance of our industry and raising awareness of it. It is still a somewhat niche field, and many people still do not understand what MICE or Convention is or why it is so important that a congress devoted to, i.e., artificial intelligence, was held in our city. Such recognition makes people ask questions – and they have the opportunity to find out more.

Q8: What are your thoughts on our selection of the influencers?

I really like the formula of appreciating people connected with the MICE industry or awarding venues of this sector in competitions or rankings. It combines elements of fun and competition, builds tension and media buzz. The preselection made by the editors required a lot of effort – it is quite a challenge to choose and assess the industry leaders from the entire Central and Eastern Europe, where so many countries and cities perform the promotion of business tourism very professionally.

Q9: In your opinion, who deserves the title of the TOP influencer if you had to choose from the finalists yourself?

What a trick question at the very end. I am convinced that every person in the ranking deserves to be honoured. In the ranking, there are both representatives of tourism and national boards, and representatives of city convention bureaus. We all work in different realities, different structures, but we have one goal – the promotion of MICE destinations. The fact that we have been recognised in the voting means that we are on the right track, so congratulations to everyone.

Since 2013, Malgorzata has been the manager of the Krakow Convention Bureau, where she is responsible for the implementation and supervision of programmes and documents related to the development of business tourism, including the Action Plan for Business Tourism Marketing in Krakow and the “Sustainable Tourism Policy for Krakow 2021-2028”. She actively cooperates with congress bureaux, organisers of conferences, fairs and meetings and other entities interested in organising congresses and meetings in Krakow. She is a member and leader of the organising committee, which in 2021 obtained the rights to organise the ICCA 2022 Congress in Krakow. Malgorzata is also involved in local industry cooperation as part of the Kraków Network initiative, co-organiser of the project’s working group meetings.

Most Read Interviews in 2022

Urška and Jure Sadar: “There is a tradition of high-quality design in Slovenia”

Maja Vidergar: “Our way of life should change if we want to survive on this planet”