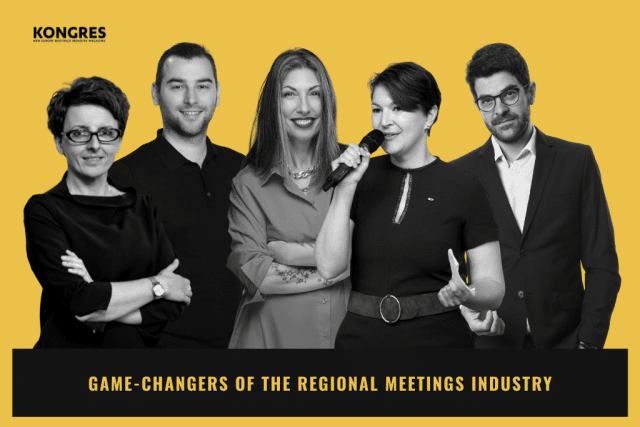 This year marked Kongres Magazine’s eighth selection of the most influential people in the regional meetings industry. In-depth interviews saw distinguished influencers delve into the future of events, their greatest achievements and what changes they would like to see in the future.

Influencers were divided into several comparable categories, thus offering an overview of Who is Who in the regional meetings industry. Below are the interviews conducted with the most influential people in the meetings industry.

Aigars Smiltans: “2022 should be the year we go back to live events”

Tadeja Pivc Coudyser: “I would like to see the meetings industry as part of the destination’s strategy”

Igor Kovačević: “Stepping out of the comfort zone is a must”

Kongres Magazine talked to Igor Kovačević, Assistant professor at the Faculty of Economics in Belgrade and CEO of Serbia Convention Bureau.

Eleni Sotiriou: “The expertise of a destination’s professionals is a valuable asset”

Andrzej Hulewicz: “These last two pandemic years made me a newcomer again”

Malgorzata Przygorska-Skowron: “Congresses should continue to have the power to change destinations”

Fredi Fontanot: “The MICE industry is like a theatre”

Ziya Artun: “Our industry is always one step ahead”

Dušan Borovčanin: “2022 will be the year of the start to full recovery”

Tanja Bogdanov: “I am proud to have pioneered Serbia’s meetings industry”

Kristina Mirosavljević: “Every business has to be mission-driven”

Claudia Badiu: “I focus on putting Romania on the map as an emerging MICE destination”

Kyriakos Pozrikidis: “An exhibition centre is more than economic infrastructure”

Paula Fanderowska: “We will be able to return to hosting in-person events”

Interview with Paula Fanderowska, Vice President of the Management Board of Krakow5020 Ltd.

Petra Stušek: “Multi-hub meetings will be an alternative to large-scale international meetings”

Interview with Petra Stušek, Managing Director at Ljubljana Tourism and Board President at European Cities Marketing.

Sanja Vukov-Colić: “New ways of thinking are a sure way of re-establishing growth”

Mariska Kesteloo: “I would love to see a change in our industry”

Interview with Mariska Kesteloo, Founder of Word of MICE.

Valentini Amarantidou: “Covid has helped us reset and rethink our business and profession”

Olga Krzemińska-Zasadzka: “Now is the time to start rebuilding the industry”

Melinda Rebrek: “I hope that human nature will prevail and keep the event industry alive and kicking”

Jaka Gornik: “Digitalization is a perfect formula to grow in the next few years”

Interview with Jaka Gornik, founder and CEO at Confiva.

Marko Ertl: “We hope to create momentum to experience a full season of events”

Interview with Marko Ertl, Co-Founder and Director of Wrapstars.

Zsolt Kassai: “Creating value and long-lasting experiences inspires me the most”

Nadin Kenderesy: “The key challenge of the future is hybridisation”

Dada Jerovšek: “We want to witness a change from not working at all to working 24/7”

Stefan Kozak: “The current situation has shown us that the power of humanity is really strong”

Maja Babic: “New technologies will play a crucial role in the development of the industry”