LOCATION
The location by the sea on the green cape between Piran and Portorož is one of the main competitive advantages of Hotel Bernardin. In the central part of the resort is the church of St. Bernardin from the 15th century, after which the resort derives its name. The Resort has a total of 731 rooms in three hotels. Flagship is the five-star Grand Hotel Bernardin, Histrion Hotel has four stars and Villa Park has apartments and rooms of 3 stars category. The diverse offer in one place is, in addition to the location, the second important competitive advantage of the Hotel. 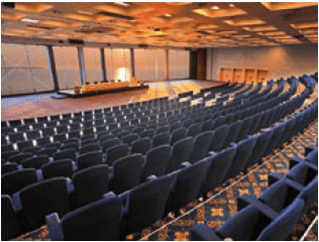 ACCESSIBILITY
Among Slovenian tourist municipalities, Piran takes first place. Most tourists come to Portoroz by road. Despite the fact that Portorož has an International Airport, it could hardly be described as a flight destination. So the accessibility of the town is quite problematic. But the Hotel is perfectly suited to the current convention visitors with ample parking, which boasts of more than enough parking spaces. 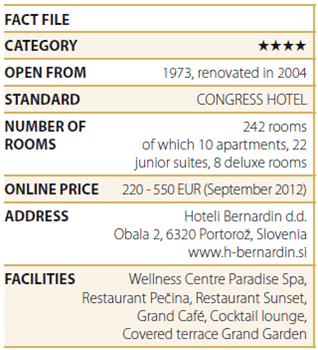 COLD APPETISER – Architecture and aesthetics
At its inception, Hotel Bernardin, clamped in the bedrock, was an architectural pride of the former Yugoslavia. Today the Hotel does not awaken euphoria because of architecture, but more because of the functionality it offers. At the same time it also does not disappoint, because it is a combination of modernism and functionality that makes all rooms have views of the Bay of Piran.

WARM APPETISER – Personnel and culinary offer
We have heard and seen better and worse reviews of their cuisine, but we dare to say that staff operates homogeneously and harmoniously because it has many years of congressional experience. This is especially true for the congress catering services. One cannot get rid of the feeling that one is sitting in a giant dining room, despite the friendliness and professionalism of the team. The predominant Mediterranean cuisine, which is based on the Istrian tradition, is of good quality and meticulously prepared, but not without errors. The hotel bar closes precisely on time, despite the long queue of thirsty congress participants. We would also like to see more than what their restaurant offers now, but obviously this is not so relevant to the current structure of the Hotel’s guests. In this area it would be necessary to refresh the offer, move forward and think in the direction of more modern trends. For ideas they do not need to look far away.

MAIN COURSE – Congress and hotel offer
The hotel has an interesting story full of ups and downs. Following the recent renovations it has become the largest Convention Hotel in this part of the Adriatic. This was the main Hotel’s trump card for both the low tourist season and the high congress season. It is also true that the original architectural design brought some shortcomings, which are difficult to pass by. First of all, the rooms are too small for today’s standards and their renovation is much needed. Rooms are very conservative and remind you of another time, and they do not exude the expected quality. Hotel management will have to seriously consider the urgent renovation of rooms. Currently, this deficiency is somehow forgiven by Congress buyers. A completely different story is the Convention Centre that functions smoothly and is spatially very well balanced. Practically the only one in Slovenia that offers such a ratio between different categories of rooms and the size of the Convention Centre. In total, there are 16 Halls, with the largest hotel Conference Hall in Slovenia, which can accommodate up to 1.100 participants. 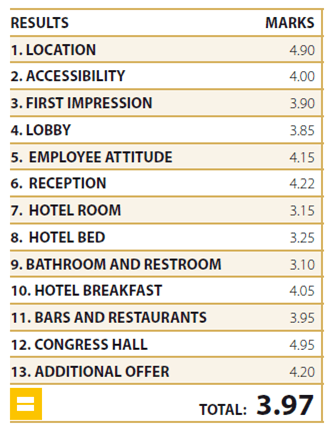 DESSERT – Additional offer
Very diverse offer with three hotel beaches, a wellness Centre in the Hotel Historion and a marine park Laguna Bernardin. Commercial Street, a water sports centre, tennis courts, a diving centre and a smaller lagoon are just a part of the rich offer of this tourist resort.

OVERALL IMPRESSIONS AND CREDIBILITY
Congress organisers are looking for surplus, quality and an attractive location. All this Hotel Bernardin had, but the old glory accumulated much dust. The Hotel was the first real Convention Centre and following the development, a number of the same Convention Halls at first view ware created. But cards have shuffled. Competition is active. In Portorož, Kempinski now sets the standards and the distinguishing advantage remains the size of the main Convention Hall. In the Hotel part, Bermardin is now lagging behind the competition, but remains to have an advantage because of its Congress capacities. The Hotel chic requires a lot of time and money and also for this hotel it is true that it is sometimes better to have a star less and more satisfied guests.

Porsche chose Croatia as one of their Porsche Travel Experience destinations