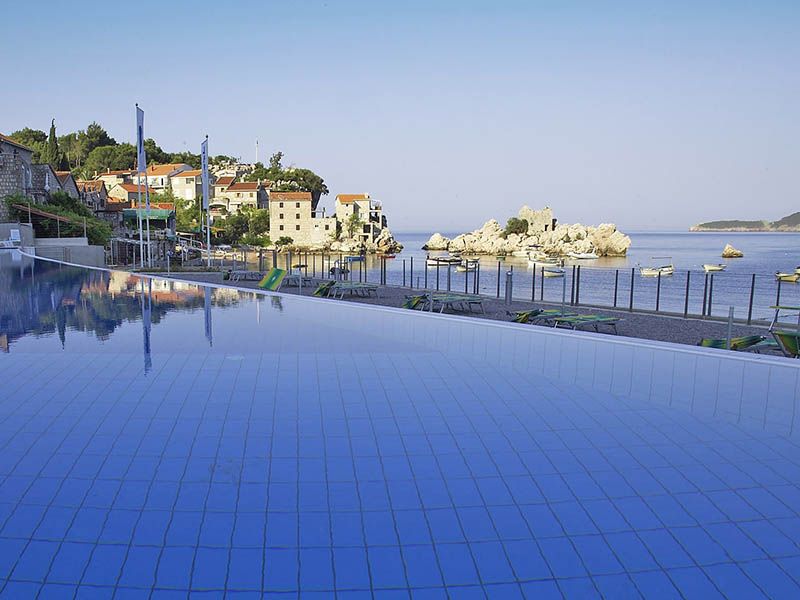 LOCATION
Buying the hotel in Pržno in 2001, just a hop away from the famous Sveti Štefan (St. Stephen), has proven to be a success story for the owner, Slovenian company HIT, which has successfully realised the strategy of the largest entertainment tourist complex in Montenegro. Today it has quite a lot of competition on the market, but conference guests are still attracted by the integrity of the offer and a romantic bay in the former fishing village of Pržno. Also because of this the hotel has become the centre of meeting tourism on the Montenegrin coast.

ACCESSIBILITY
The hotel is situated half way between Budva and Sveti Štefan and the airport in Podgorica is 70 kilometres away. It is just a few minutes away from the Sveti Štefan exclusive tourist complex, one of the most attractive locations on the Montenegrin coast. Parking for guests is well taken care of, although accessibility can sometimes be spoilt by a very busy road to Budva. Guests have a shuttle bus to Budva available, which runs every 20 minutes.

COLD APPETIZER Architecture and Aesthetics
The hotel is unobtrusive and placed pavilion-style in the bay of the Pržno fishing village. Green surroundings, a magnificent bay and the picturesque backdrop nicely outweigh the hotel architecture with its brick facade and terraced structure that fits nicely into the environment. The Hotel Maestral has had so much cosmetic change that it is possible to differentiate it from the competition, be it the renovated reception or the small changes in the rooms, which are already calling for a more comprehensive and thorough overhaul.

WARM APPETIZER – Staff and Food
If rooms are the weakest part of the hotel, on the other hand the staff and culinary offer are the more powerful part of the story. The staff, with the exception of the reception, is extremely professional, which to the meetings industry above all counts a lot. They are trying hard with the cuisine, which is most evident in the richly-stocked buffet breakfast with a large selection of home baked pastries and culinary surprises. If staying in Pržno for a longer time, a more authentic Montenegrin cuisine an also be tried out in the village.

MAIN COURSE – Congress Hotel offer
The rooms and the hotel as a whole appear of good quality, but not luxurious, as might be expected from a hotel of this category. The bathrooms are solid, but not at the level of competing hotels in Budva. Some hotel cosmetics are missing that you would expect in a hotel of such category. The hotel is well maintained and very clean.

The convention Centre was among the first in Montenegro and with its multifunctional design it works very well. The largest hall, Bankada, takes 368 participants and has technical equipment in accordance with expected standards, as far as the height of ceilings and transparency are concerned. In addition, there are also two meeting rooms.

DESSERT – additional offer
Friendly and hospitable restaurants in the fishing village of Pržno.

TOP – POSITIVE SURPRISES
The congress Centre, which is in excellent condition and very functional, in combination with the rich additional offer of the resort.

FINAL IMPRESSION AND CREDIBILITY
Hotel Maestral is a kind of crossover between the convention centre, the hotel and the casino. It can be considered the pioneer of such forms of tourism resorts in Montenegro. Soon after the concept was copied elsewhere on the Montenegrin coast. Maestral, despite the competition, managed to maintain the meetings primacy, but for perfection it still needs some improvements in hotel rooms. In any case the talent over the years matures and improves with age. 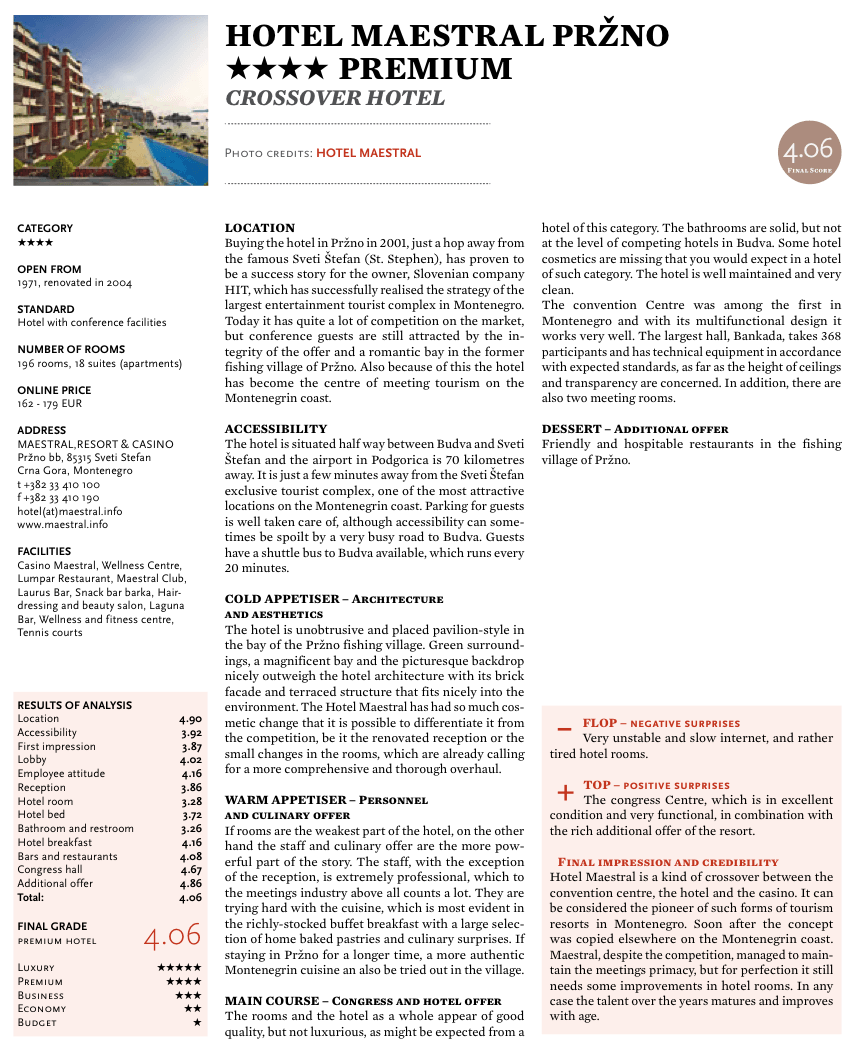