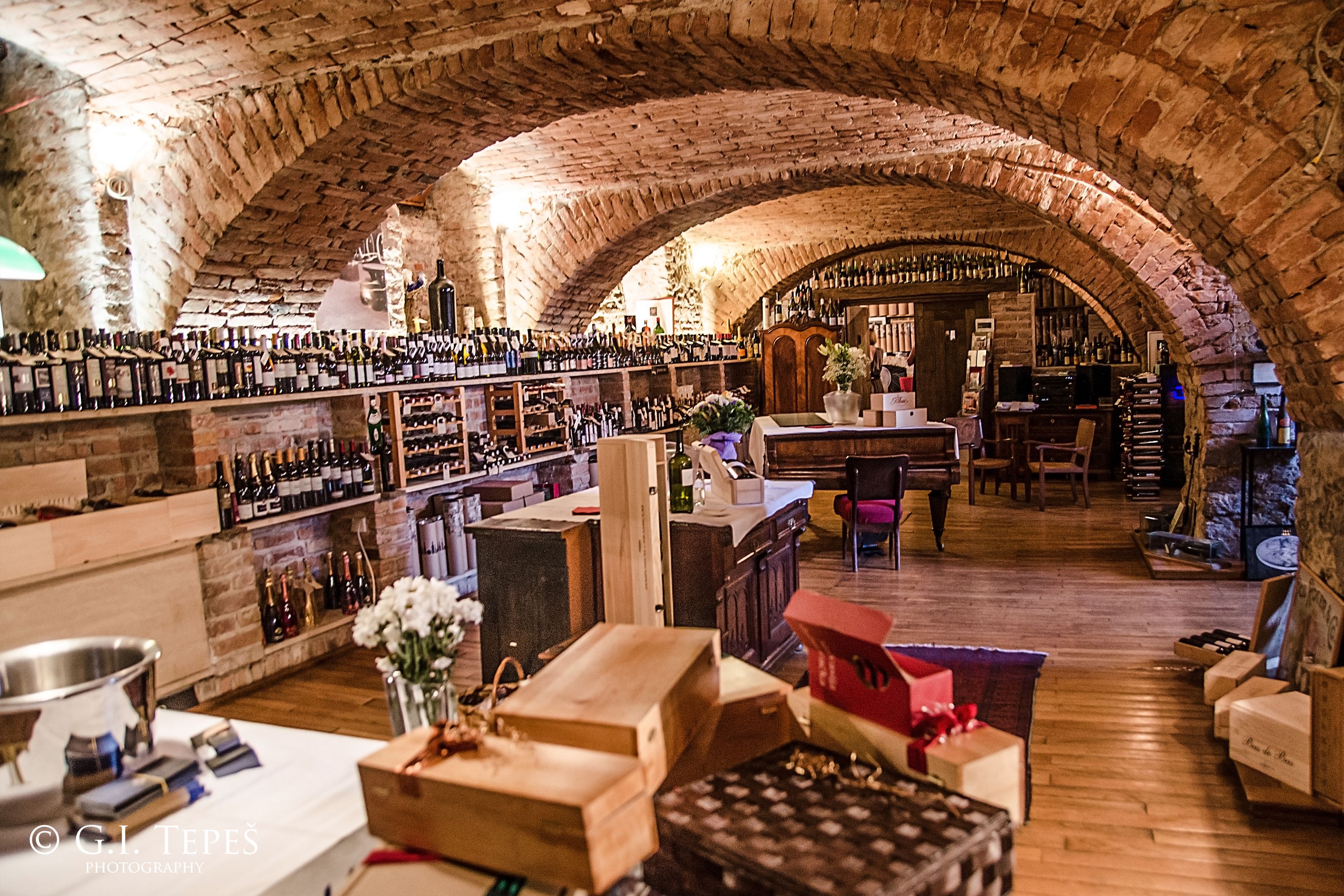 CRO-WINE is a recently launched project of wine shops where tourists as well as business groups can get familiar with the wealth of Croatian wine offer and enjoy a tasting. The eponymous mobile application also tells the story of the best Croatian wines.

Zagreb residents Davorka Krnić-Trick and Nirvana Jović recently launched an interesting project with which they are turning not only to wine lovers, but also to those who want to learn more about their favourite “drink of the gods”. This is also an opportunity for tourist agencies and all organizers of business meetings to enrich their events with wine workshops CRO-WINE where with expert guidance and an interesting story about wines they can learn more about the topic, while also have fun through tastings and quizzes.

The leading idea is to promote Croatian wines, Davorka and Nirvana in late 2013 designed a brand Cro – wine. First they launched an application Cro – wine for mobile phones, the first workshops followed. “Workshops Cro – wine were born out of our desire to introduce oenological Croatia, which is unfortunately largely unknown and neglected. For example, we often say that the Plavac at special position Dingaè is  too expensive, but when you know where and how it is grown, when you see pictures of these phenomenal positions, then you know that this wine is worth every penny. Slopes that descend to the sea are of 40-60 %, grapes gets triple insolation (direct sun, the sea and rocks on which it grows), vines give less than 1 kg of grapes (on a richer soil it is up to 4 kg) mostly everything is done by hand because of the terrain, and the roots of the vine goes into the depths from which it draws water and minerals… this wine is the pure essence of the specific terroir that you need to know to understand it and enjoy it. It is such stories that are a part of the Cro – wine shop – interesting, entertaining and educational.” says Davorka Krnić – Trick .

Wine culture is not only a part of the general culture, but also a significant part of Croatian cultural heritage that should be promoted both to the local population and to tourists, so there are different types of workshops depending on the participants, time, wine knowledge, and the like. For foreign tourists we are doing the basic 60-minute Cro – wine wine workshops, mostly in English, where they familiarize themselves with the story of the Croatian wine through interesting facts, and then through tasting several important varieties from different wine regions. But it is also possible to have “tailor -made” workshops adapted to the wishes of clients that can be in different forms, in different places and with different wines. Particularly interesting is the combined wine and food shop where guests can go to the market, buy groceries and then cook and taste wine. All of these workshops can be a lot of fun, a way of relaxation, and sometimes guests could be competing through an entertaining quiz or a kind of team building. Through Cro – wine we are also offering food education for professionals – hotel staff, restaurants, event managers and others to whom wine and culinary culture is an important part of the overall professional knowledge. Wine workshops can be organized in a number of Croatian wineries or regions chosen by the client, and one of the most beautiful spaces is certainly winery Bornstein of the family Srpek at the Kaptol, the oldest part of the city. Located in a 200 year old building, one of Europe’s most beautiful wineries has hosted numerous celebrities and famous guests.

“It is very interesting to follow the interest of students, their questions and surprise at some information that they have not yet known. My favourite is when we fail to provoke interaction and when at the end of the workshop, participants have more questions and want to buy tasted wines, visit wineries that we talked about to them – then we know that we are doing a good job.” concludes Nirvana Jović.

Wine applications Cro – wine
Cro – wine wine application is the most comprehensive application of exclusively Croatian wines. In it one can find traditional dishes and wines, a list of wine and food events, a dictionary, as well as a Google map with indicated wineries. This application is in Croatian and English, and for the most part can be used offline. It works on iOS and Android platforms, as well as on the website www.cro-wine.com. When you come to Croatia, Cro – wine app will help you find wineries, select wines and learn more about the Croatian eno-gastronomic scene. What Croatian wine was served at the coronation of Queen Elizabeth II in 1953? What is a parallel link between the Croatian vineyards and vineyards in Bordeaux, Piedmont and the Valley of the Rhone? Could champagne ripen at the bottom of the sea rather than in the wine cellar? Which Croatian Zagorje variety is called Casanova and why? Where is the vineyard carved in stone that will enter the UNESCO heritage list of cultural monuments? The answers to these and many other questions can be obtained in the Cro-wine application or at one of the workshops.

Croatian wines are increasingly popular in the world
Croatian wine history dates back to ancient history. Vines were brought to the Croatian territory by the Greeks and in 178 BC, when the Romans arrived, they found a developed winemaking and olive growing. Throughout the centuries, wine production fell and rose, but only in the last 15 years of Croatian winemaking it has an upward trajectory. Proof of this are the many medals and awards that Croatian wines are winning in the world’s most important wine evaluations, while also world renowned restaurants with Michelin stars have Croatian wines on their wine lists. The iconic restaurant The Fat Duck, for example, bought all the bottles of predicate harvest from a Croatian manufacturer.

Croatia is an area several times smaller than other, better-known wine countries, but its relief, soil and climate (terroir) are very varied so the varieties of grapes are also great and so they are growing everything from well-known international varieties to a large number of indigenous ones. It is indigenous wine varieties that have become the focus of the winemakers and wine lovers and in the market increasingly appear old, forgotten, indigenous varieties that are considered to have great potential. Crljenak kaštelanski or tribidrag are old varieties for which DNA analysis proved that they are ancestors of the more famous American Zinfandel, Italian Primitivo and Croatian Plavac Mali, that was recognized in the largest guide of the world ‘s wine varieties ever written – “Wine grapes”.

Tasting and pairing wine with food
The basic rule is to drink wine from translucent glass or crystallin on the foot. The glass is always held at the foot, and not at the ‘balloon’. In addition to the temperature of wine in serving one should pay attention to the shape and size of the cups. Wine tasting starts with observation, to determine the colour and density. Then it determines the odour, first of a peaceful wine, then glasses are whirled to intensify the flavours in wine. On the tongue there are different places where receptors of taste are situated (sweetness, bitterness, saltiness). It is therefore important that the wine before it is swallowed, is slurred in the entire mouth to make it feel better.

There are several different “schools” of pairing wine and food so England school has a rule that – there are no rules. However, we should mention the most basic rules that are useful when we are having multiple -course meals with which we want to drink different wines. The meal starts with younger wines and then we go to the more mature ones, from white to black ones, from dry to sweet … With white fish and white meats we choose younger, less powerful wines, with strong meals we choose a ripe, powerful wine. In fact, a good wine and food should never cover and gustatory override each other, but on the contrary, they should together form a harmonious whole that is gratifying to your taste buds. Finally, when one pairs wine and traditional food from the same region, the same country – one will never go wrong. All this, and lots of other interesting things you will find in the free app Cro – wine.