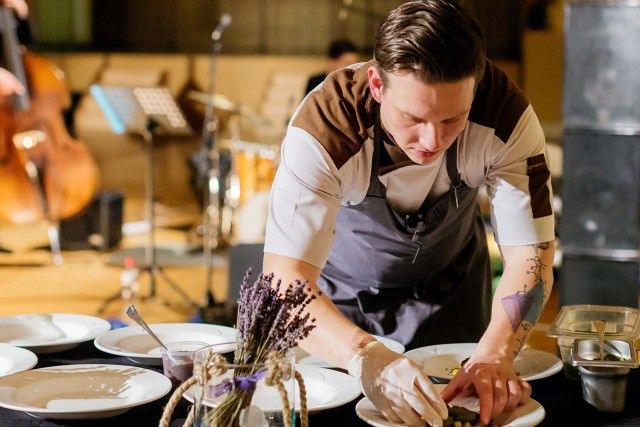 In January 2016 the Grand hotel Union introduced a new chef de cuisine. Where? Where else than in its famous and prestigious restaurant Smrekarjev Hram. A young, vigorous and wildly creative chef, Jorg Zupan, joins this iconic restaurant, known for its ambitious and excellent cooking, to spice up its offer and give it a special twist.

The restaurant is named after a talented Slovenian illustrator Hinko Smrekar, who frequently visited the old hotel’s restaurant (where today stands Smrekarjev hram) in the early 1920’s and 1930’s to socialize and meet with other artists and writers, such as the famous Slovenian writer Ivan Cankar. You can still admire his work, as two of his illustrations are decorating the walls of the restaurant. The restaurant, originally built in 1905, is offering modernist cuisine, but they also serve traditional Slovenian dishes from locally produced ingredients, so you can get a taste of a typical Ljubljana lunch.

The menus are slightly influenced by medditerenean culinary, but what is most important is that the plates are exuberating from modern, innovative and highly creative dishes, which is why Smrekarjev hram holds its position of being one of the most elite restaurants in Ljubljana, providing a memorable “fine dining” à la carte culinary experience.

Jorg Zupan, a 28 year old chef who’s first passion, since he was a teenager, has been cooking (in his teens he used to cook lunch for his family every day after school) has quite a rich variety of experiences in the culinary scene.

He started working at the Gourmet restaurant Promenada, a part of the “Bled Sava hotel resorts”. His cooking mastery evolved under his mentor Bine Volčič, one of the best and most recognized chefs in Slovenia, especially since he appeared in a television show “Gostilna išče šefa” (The Inn is Looking for the Chef) in 2012.

For Jorg this was only the beginning. Leaving Promenada he headed for Sydney, Australia, where he completed his internship in a restaurant Quay and continued his culinary adventure in London. There he engaged himself as a cook in a one Michelin star restaurant for a year, where he learned the basics of the classical French cuisine. He came back to Slovenia in 2013, to work in another eminent restaurant, along with his greatest mentor and idol, Igor Jagodic.

Jorg likes to point out how grateful he is for collaborating with Igor, who gave him all the freedom to explore his own culinary potential and motivated him to evolve his own creative cooking ideas. During this period he once again visited the United Kindom, but this time he was aiming higher. As an intern he worked in a three Michelins stars restaurant, the Fat Duck, an experience that is, according to Jorg, best described in two words: “Absolutely fantastic!”

We teamed up with Jorg to tell us something more about himself, about cooking and about the culinary trends which are about to conquer Slovenian chefs.

Q: How would you describe your style of cooking (your kitchen philosophy)?
I try not to use the word style too much when it comes to cooking, I find it a bit limiting. I follow the seasons and I let the ingredients guide me. I also put a lot of mind into technique, classical as well as modern.

Q: Where does your inspiration for cooking come from ?
Inspiration… hm… mostly nature, but also music and art. Sometimes even a conversation with a colleague or a mentor.

Q: What is your other passion besides cooking? Do you have any other specific hobbies that define your life style?
Cooking takes most my time, but I enjoy sports and hiking. I used to play cricket and was a member of Kranj’s cricket club. I don’t have the time to play that much anymore but cricket is still my favourite sport. I also love music and I just love Vinyl.

Q: Which restaurant do you most enjoy eating at on your night off?
I tend not to visit same places often, unless they are exceptional. I like trying new stuff all the time.

Q: What food trends are you expecting to emerge in the Slovenia in 2016?
The world is still very much under the influence of the modern Scandinavian cuisine. Local ingredients, modern techniques, fermentation etc. I think it will last for some more time, due to the fact that it is so nature based, which I also like, but in the future I wish for Slovenian cuisine to stop following trends and start setting them.

Q: In 2013 you have participated at the Month of Design in the “Food Design” category, where chefs were to produce a culinary product with the criteria of good design. Together with chef Igor Jagodič you created a pastry, a sweet illuminated circle. Can you tell us something more about this experience?
Due to the fact that until then I have never participated in any cookery contest, since I’m not a great fan of culinary exhibitions and similar cooking duels. Food, in my opinion, is to be consumed and cooked for guests not judges. But the idea of cooperating with designers attracted me. This project was mostly mine, Igor helped me as a mentor, whereas in this area he has much more experience. When I heard that we got 1st place in the category of culinary excellence I was impressed. In future, I will probably participate again in a similar event, but only if the concept of the competition will intrigue me.

Q: What are the biggest challenges you are facing working at Grand Hotel Union. Can you share with us your menu-planning strategies to upgrade their culinary offer?
There are many challenges. Biggest ones right now are coping with the new working environment, systems, etc. The transition, building the team…Strategies for the future? All tasting menu concept.

Q: You are preparing a gala menu in February together with a Slovenian renowned chef Alma Rekić. What’s it like to work with one of the best pastry chefs in Slovenia?
I have known Alma from before, but this is the first time we are cooperating professionally. We have a very relaxed relationship and I think we make a great team. We divide our work in testing and tasting different dishes for the menu and than together we analyse the results and we try to make recipe improvements.

Q: Is there a special chef that you most admire or you learned from?
There are many… Lately and most important is Igor Jagodic

Q: What are your essential ingredients, the things you couldn’t live/cook without?
Salt and Water (laugh)

Q: Are your recipes influenced by the specific cuisine from other countries. Where do you think your greatest influence lies?
French cuisine is my base, but lately I must admit I am sourcing quite a lot of influence from the Japanese.

Q: Can you reveal the 3 best restaurants in Slovenia.
Strelec, Hiša Denk and of course Smrekarjev Hram.

HOW WE DID IT: How to organise sustainable events step by step