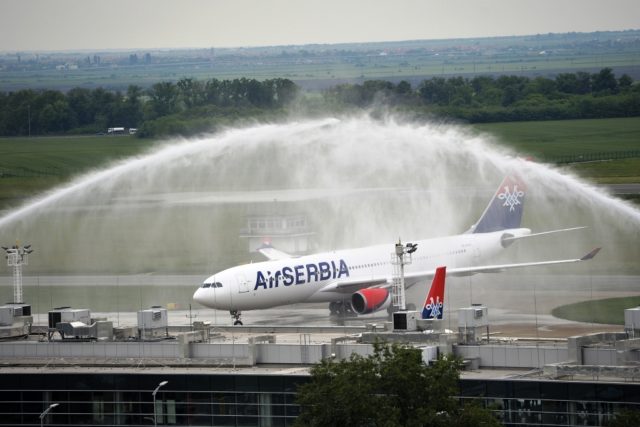 Air Serbia has begun its network expansion this morning, which will see the carrier introduce five new routes over the next week for a total of 45 destinations. Furthermore, the airline has added a wet-leased Adria Airways Bombardier CRJ900 aircraft to its fleet as of this morning in order to support its network growth over the summer.

Flights to Hamburg, Kiev and Sofia

The 86-seat CRJ900 will be deployed on flights to Hamburg, Kiev and Sofia. The addition of five new routes marks Air Serbia’s biggest network expansion since the summer of 2014 and the first new routes to be introduced since flights to Zagreb were launched in December that same year.

“This arrangement with Adria Airways is a perfect example of the growth opportunities that can be created when small, like-minded airlines work together for a mutually beneficial outcome”, Air Serbia’s CEO, Dane Kondić, previously said.

Services to Hamburg were resumed this morning after nine years. Later on in the afternoon, Air Serbia will return to Ohrid following a three-year hiatus.

The Mayor of Ohrid, Nikola Bakračeski, said, “The Belgrade – Ohrid service is significant for us in two respects. Firstly, the flights will cater for Serbian tourists but also travellers across Europe and the United States, keeping in mind that services from New York to Belgrade will be launched. On the other hand, these flights will benefit locals who will be able to travel to various destinations and back home via Belgrade”.

The Ohrid service will operate with an ATR 72 turboprop, with exception to the inaugural flight which will be run with an Airbus A319 aircraft.

Tomorrow, the Serbian carrier will launch flights to Kiev. It will be the first time the two cities have been linked since Ukraine’s Aerosvit Airlines suspended services between Kiev and the Serbian capital in June 2011 citing “technical reasons”. The carrier has since filed for bankruptcy. Two years ago, Air Serbia cancelled plans to launch daily flights to the Ukrainian capital due to instability in the country at the time. Adria Airways is expected to codeshare on the route. Services between the Serbian and Ukrainian capitals will come exactly 42 years to the day Air Serbia’s predecessor, JAT Yugoslav Airlines, introduced the route.

On Saturday, Air Serbia will launch flights to St. Petersburg. Services will operate with an A319 aircraft. In 2015, Belgrade was the top unserved destination in Europe for Pulkovo Airport, with no direct air service between St. Petersburg and the Serbian capital. Over the past five years, indirect traffic between the two cities grew by 263%, and in 2015 amounted to over 20.000 passengers.

“The new service represents a weekly capacity of 768 seats and will enable us to capture the significant demand for point-to-point travel between Belgrade and St. Petersburg, enhance the flow of trade and strengthen the long-held and friendly bilateral relations between Serbia and Russia”, CEO Kondić, said. Close to 42.000 Russian tourists visited Serbia in 2015.

Finally, Air Serbia will launch its first long haul service to New York next Thursday. It will mark the return of flight numbers JU500/501 after 24 years. Previously, JAT used the flight numbers for its Belgrade – Zagreb – New York service. The inaugural flight to the Big Apple will carry a number of VIP guests including the Ambassador of the United States to Serbia, Air Serbia’s CEO and others. However, despite being amongst the first to purchase a ticket, the Serbian Prime Minister yesterday said he would not be flying on the inaugural service. The route will be launched exactly fourty years since JAT introduced flights to New York.