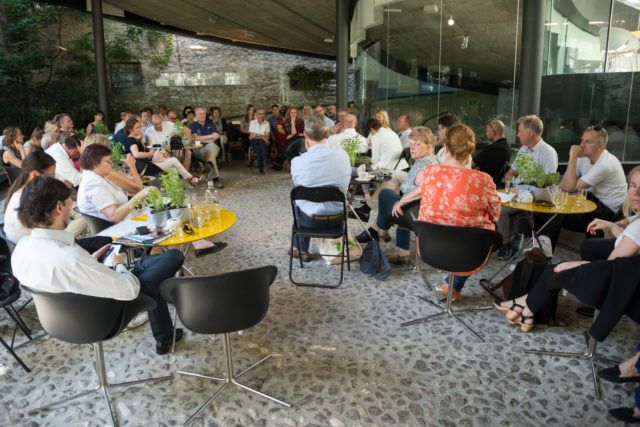 On 22 June 2016, the European Green Capital 2018 was announced in Ljubljana. The accompanying programme went on the whole day with diverse events such as the round table titled »Green Cities -Challenges and Experiences« and the presentation of the car sharing system Avant2Go.

The round table regarding European capitals

Deputy Mayor Tjaša Ficko underlined in her introduction that Ljubljana received the title EuropeanGreen Capital because it made the highest number of changes in the right direction in the shortest period of time and it also successfully combines the following two aspects: preserving the green identity of the city and introducing sustainable changes to degraded areas. »It is important to have a vision and the courage to carry it out,« said the Deputy Mayor and added that the title European Green Capital put Ljubljana on the world map, it is bringing in new investments, has an impact on the growth of tourism and has other positive effects.

Deputy Mayor Rudolf Jelinek said the residents of Essen are delighted that next year their city is going to be the European Green Capital. He added that people still see Essen as an industrial and coal-mining city but in spite of that the city has many green areas which it intends to preserve and expand, and there are also deliberations about closing the city centre to traffic.

Mayor Zoran Janković also participated in the round table and stressed that cities around the world should follow the path of sustainable development as it also involves solidarity with future generations so they inherit at least well preserved nature that we have. In addition, he emphasized that at the presentation of such an important award the responsible Europea Commissioner should be present because this would further strengthen the significance of the title.

The round table was followed by guided tours of the city, the Regional Waste Management Centre – RCERO Ljubljana and the Genesis exhibition by Sebastião Salgado.

The new vehicle sharing system was also presented on the occasion – the electric »car sharing« model Avant2Go using exclusively electric vehicles. The system is designed in line with sustainable co-existence principles, is one of the first in Europe and it was developed by the Avant Car company with the support of the Comtrade company and other partners.

The programme concluded with the evening ceremony at which the European Commission announced the European Green Capital 2018. The title was awarded to the Dutch city of Nijmegen. The Mayor of Nijmegen Hubert Bruls thanked Ljubljana for its hospitality at receiving the award and pointed out that the city of Ljubljana serves as a role model.