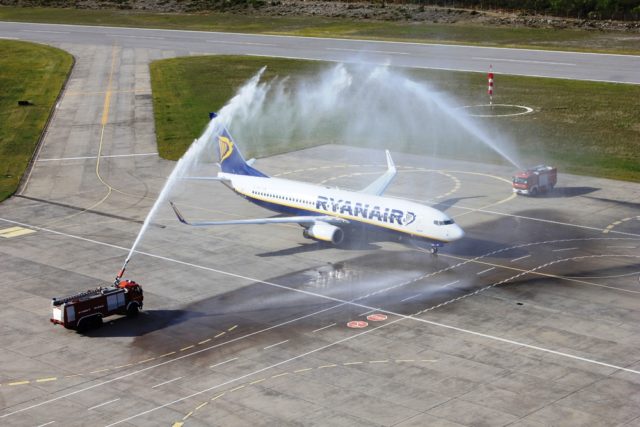 Europe’s largest low cost airline, Ryanair, launched operations to Serbia with the country becoming its third market in the former Yugoslavia following Croatia and Montenegro. The inaugural flight from Berlin to Niš was piloted by Serbian captain Vladimir Milićević.

The service marks an important development for Niš Constantine the Great Airport, which will now be served by two major European budget carriers. Ryanair will introduce a further three routes to Niš (from Weeze, Bratislava and Bergamo) over the next two months. It will operate up to eight return flights each week from the south-east Serbian city as of November 1 and plans to handle 120.000 passengers on its services during its first year of operations.
Ryanair’s Chief Commercial Officer, David O’Brien, said, “We have been planning our arrival onto the Serbian market for a long time. It will take a while to judge whether it was a wise decision but considering loads on our Berlin flights, we believe that the Serbian market has great potential”. The airline’s Sales and Marketing Executive for Italy, Greece and Croatia, Chiara Ravara, noted that the carrier plans to add more new routes to Niš. “We look forward to opening additional services in the future. Basing an aircraft is currently not an option for us, but developments take place quickly with Ryanair. Of course, this does not mean that Rynaiar will not continue expanding its network from Niš and attributing to its passenger growth”.
Ryanair is considering introducing flights between Malta and Niš during the summer of 2017. According to Niš Airport’s General Manager, Vladica Djurdjanović, discussions between Serbian and Maltese local authorities, as well as Ryanair, are currently under way. During the first eight months of the year Niš Airport handled 50.555 passengers, which is 14.300 travellers above its 2015 end-of-year result. The airport is also in talks with several other low cost airlines including Pegasus, easyJet, Norwegian Air Shuttle and Eurowings. After years of being overlooked, Niš Airport has managed to attract no frills carrier over the past year by slashing its passenger tax to just three euros.
Post Views: 869