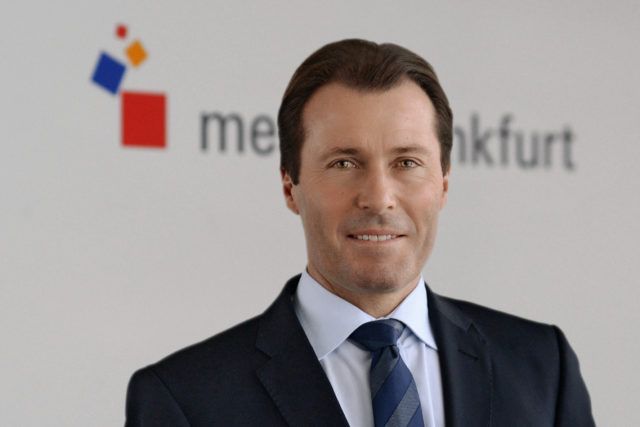 “WE CREATE PLATFORMS THAT REFLECT THE NEEDS OF OUR CUSTOMERS AT ALL TIMES AND EVENTS THAT PROVIDE ADDED VALUE.”

Wolfgang Marzin is the President and CEO of Messe Frankfurt, one of the world’s leading trade fair organizers, generating around € 648 million in sales and employing 2,244 people. Having studied business administration with a focus on foreign trade, he began his career in the meetings industry in 1990 as Exhibition Manager for Foreign Trade Fairs at IMAG Internationaler Messe- und Ausstellungsdienst Munich and continued with many managing positions through years at Messe München GmbH, Messe Düsseldorf North America, Gesellschaft für Handwerksmessen mbH,Leipziger Messe and from 2010 started his position as Member of the Board of Management at Messe Frankfurt, becoming President and CEO of Messe Frankfurt the same year.

Q: How is the exhibition market changing?
Trade fairs are not static entities but always hold a mirror up to their markets. We observe the markets and sectors, adapt our concepts, orientations and points of focus to the latest developments and set the tone accordingly – in this way, we create platforms that reflect the needs of our customers at all times and events that provide added value. It is no accident that many of our trade fairs at our Frankfurt base are the leading events in their respective sectors.

Q: Why do you think people are still interested in exhibitions?
Exhibitors and visitors attend our trade fairs to meet other people with similar interests and to network. At trade fairs, people are brought together, deals are made and knowledge is shared. Above all in times of increasing digitalization, there is a growing need for formats that involve this kind of personal interaction. There is no substitute for experiencing products live and being able to see and touch them, for soaking up inspiration at first hand and striking up conversations with people – this is what makes trade fairs a unique experience.

Q: What makes a good exhibition organizer?
Messe Frankfurt’s job is to combine the best from all over the world and from all branches at our events, thereby bringing supply and demand together – this is what our exhibitors and visitors trust us to do. Every day, our 2,244 employees work to establish a professional basis for doing business effectively. Our success in doing so can be attributed to our experience and know-how and to the working relationships that we have enjoyed with our partners for years.

Q: What do you believe are the key statistics determining ROI for exhibitors?
We give our exhibitors the necessary tools for successful trade fair activities and help them during all stages of the planning and implementation process. These include services relating to stand construction and technology, but also marketing measures and digital expertise. Having a well thought out trade fair preparation plan is half the battle.

“There is no substitute for experiencing products live and being able to see and touch them, for soaking up inspiration at first hand and striking up conversations with people – this is what makes trade fairs a unique experience”

Q: What do you think about this year’s trade fairs and what are your company’s biggest business challenges?
Event year 2016 has been extremely promising so far – in some cases, new records have been set for relevant key figures such as exhibitor count, visitor count, international participation and customer satisfaction. The most recent success reported was Automechanika in mid-September: with a total of 4,820 companies taking part, it recorded the highest exhibitor participation in the history of the event. One challenge in the trade fair business is responding appropriately to sector developments. The sectors
that are relevant to us have their fair share of consolidations, mergers and closures, and this is reflected among retailers. Here, it is up to us to set the tone and to serve the needs of exhibitors and visitors as well as possible.

Q: Are the national and regional tourist organizations fulfilling their role in promoting trade fairs?
For the most part, our flagship events in Frankfurt are geared towards trade visitors – this means that these events do not attract tourists as such. As professional business platforms, they firstly offer manufacturers and companies the opportunity to present their product innovations and to forge and cultivate business contacts. Secondly, international retailers use trade fairs to structure their product range.

Q: What key business lessons have you learned over the years?
Success should always be attributed to a team performance and never to an individual person.

Q: What would make your job easier?
Service professions are very demanding – but also extremely stimulating. Listening attentively and engaging in open communication is always helpful.

Q: The most memorable event for you?
There are many moments that I look back on fondly. Most of these are the result of long, hard work.

Most Read Interviews in 2022

Urška and Jure Sadar: “There is a tradition of high-quality design in Slovenia”