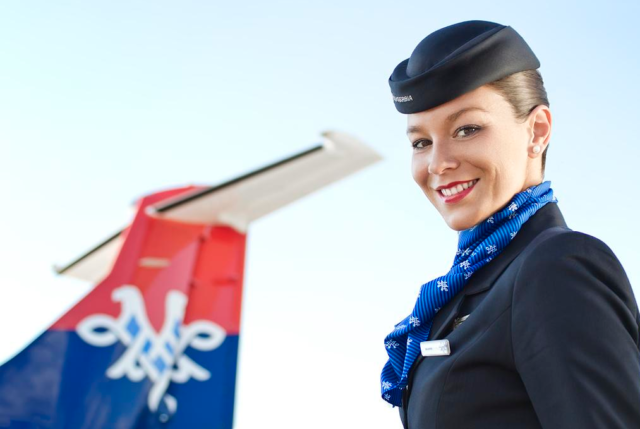 Flights will be operated by an ATR 72 aircraft, offering 560 return seats between the two cities each week. Venice will become Air Serbia’s third destination in Italy after Rome and Milan and one of its longest routes operated by a turboprop. The carrier’s CEO, Dane Kondić, said, “Our four-weekly service will provide business and leisure travelers with multiple travel options to the Serbian capital, as well as quick connections over Belgrade to Southeast Europe and the Middle East”.

The new flights to Venice will be promoted at the upcoming Belgrade Tourism Fair which begins tomorrow. The service will mark the first time Belgrade has been linked with nonstop flights to the Italian city. While JAT Yugoslav Airlines did operate to Venice until the breakup of the former Yugoslavia, the flights were maintained from Dubrovnik, launching back in 1963. The Serbian carrier anticipates strong loads on the upcoming route. “More than 55% of the Serbian diaspora in Italy, estimated at up to 70.000 people, live in the catchment area of Venice Marco Polo Airport, and will benefit from this new air link to Serbia. We have established a solid presence in the Italian market and will work with our tourism and trade partners, including Alitalia and Etihad Airways, to make the new service a success”, Mr. Kondić said.

Air Serbia previously maintained sales to Venice through its partner Air Berlin with the carrier codesharing on its German counterparts’ flights between Dusseldorf and the Italian city. In an interview to “Gulf Business” last year, Mr. Kondić highlighted Italy as a market with great potential for Air Serbia. “There’s probably half-a-dozen to a dozen points that we could cover that we haven’t started flying to yet. In Italy, we don’t fly to Florence or Venice, for example. Each airline [Etihad Partners] is focusing on core networks now, then we’ll look for incremental opportunities”, Mr. Kondić said. Venice becomes the airline’s first new destination for the 2017 summer season. It has previously announced it would terminate its operations to Istanbul starting March 15, sighting declining demand for travel to Turkey. Further flight details for the new Belgrade – Venice service can be found here.