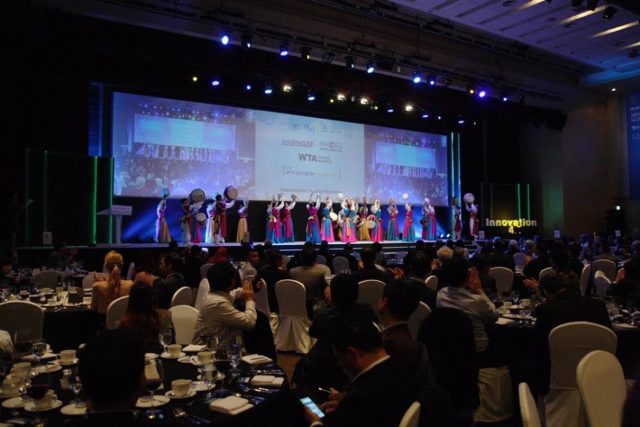 Jointly hosted by Seoul, Korea’s capital, along with the neighboring city of Incheon and Gyeonggi Province, the one-day event sought to promote the prime attractions of each region as business events and travel destinations to the Indian meetings sector.

Around 200 government and corporate sector tourism professionals and media attended the event, which featured a travel trade show with Korean sellers and Indian buyers during the day, followed by a special Korea-themed night of entertainment.

“May this roadshow open many opportunities for Korea to host Indian MICE events!” declared Korea Tourism Organization (KTO) Vice-President Choi Jong Hark during his welcoming address at the Korea Night event. Mr. Choi’s enthusiastic pronouncement set the tone for the evening, which was followed by a spirited presentation by KTO India Marketing Manager Sandeep Dutta. Video presentations were then screened by the Seoul, Incheon, and Gyeonggi convention bureaus, after which there was a live performance, a lucky draw and a dinner of Korean-themed cuisine.

For the event’s hosts, the evening provided an opportunity to highlight the distinct strengths of each as travel and event destinations, including Seoul’s well-developed meetings infrastructure, Incheon’s new Songdo International Business District (IBD), and Gyeonggi Province’s natural assets and resort-style unique venues, among other features.

Also promoting at the event were Korean Air, which in December expanded its non-stop flights to New Delhi to five times per week, and Asiana, which already provides the service daily. Other participants included 40 major businesses within the Korea MICE Alliance network, which includes the country’s top event venues and service providers.

The highlight of the evening was provided by Drawing Show, a non-verbal live art performance enjoyed attendees of many Korea-hosted international events, with the roadshow’s assembled guests proving no exception. For Korea MICE Bureau Executive Director Kapsoo Kim, it nicely encapsulated the ways in which Korea can appeal to an international audience. “Like NANTA, Drawing Show is also one of many non-verbal performances especially designed to communicate the fun of Korean culture without the need for words, making them especially great for international visitors.” He said, adding, “The Korean Tourism Organization is offering special meetings support programs that incentivize adding beautiful performances like these to your event in Korea.”

The India MICE Roadshow forms part of efforts by Korea to diversify the country’s inbound business events and leisure tourism sector in response to newly-growing feeder markets such as India and strongly-Muslim nations. The KTO will also be attending this month’s Arabian Travel Market, as well as tourism exhibitions in Kazakhstan, Malaysia, and Indonesia throughout 2017. Further information about Korea’s rich business events and tourism assets can be found at www.koreaconvention.org.