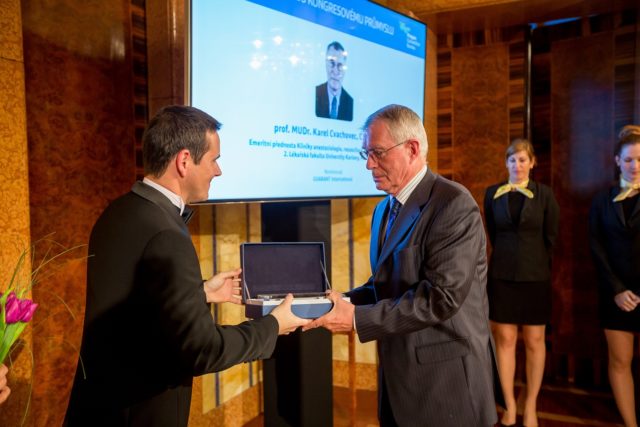 Ambassador Awards Evening ceremonial presentation, a part of the Prague Convention Bureau’s Ambassador Program, took place on the premises of the Residence of the Mayor of Prague on 13th April. The event was held with the support of the City of Prague, represented by the Mayor – Mrs. Adriana Krnáčová. The gala evening was moderated by Veronika Paroulková.

Prague Convention Bureau has been awarding Congress Ambassadors with the greatest credit for the development of congress tourism in Prague in the previous year since 2010. The aim of the event is to award renowned Czech scientists, top experts, professors, and doctors who represent the Czech Republic in international professional associations, actively lobby in favor of Prague and then participate in the preparatory work of scientific, program or organizing committees of international congresses held in Prague. The awards are also handed out in the “Corporate Event of the Year” category. For 2016, following Ambassadors were awarded:

“Convention industry is an increasingly important sector of Prague’s economy, this fact being confirmed by the statistics of the Czech Statistical Office, which, last year, recorded the largest number of conferences in the capital over the past decade. In total, there were 4,426 conventions in Prague. I would like to thank all the congress ambassadors, who participated in the process of acquiring the events for Prague, for this achievement,” said Roman Muška, Managing Director at Prague Convention Bureau.

Prague Convention Bureau (PCB) is a non-profit organization established in 2008. The company acts as an official representative of the Prague congress tourism and promotes the city as a one

of the European leading congress destinations. Together with Czech tourism bodies, partners and members the PCB offers effective assistance in organizing conferences, meetings, seminars, exhibitions and incentive events in Prague.