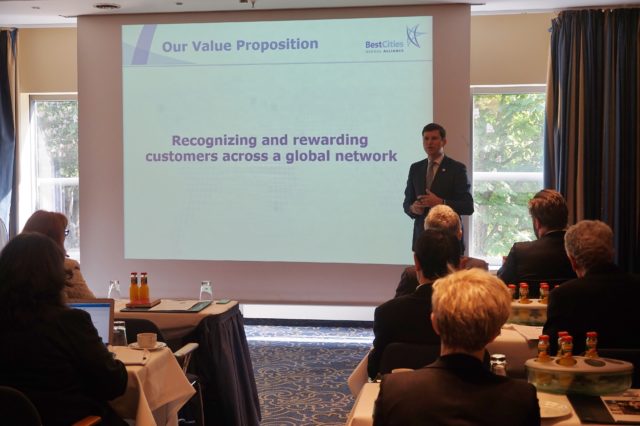 Madrid Convention Bureau (MCB) was today (16 MAY) officially confirmed as the twelfth partner of BestCities Global Alliance. The new signing will bring a truly dynamic international congress city and convention bureau to the alliance that now holds 12 members.

With more than three decades of experience, Madrid has played host in the last years to some of the world’s leading events including the World Petroleum Congress, the World Air Traffic Management Congress and The Congress of the International Dental Federation. With more than 14,000 meetings and events per year serving to more than 1 million delegates, MCB is already paving the way for global standards in the sector.

Adding value to MCB’s offering and shaping its future growth, BestCities will work with MCB to support future innovations and refine its legacy development, such as creating impactful city events for its future association meetings.

As the first BestCities destination within the Mediterranean, MCB will help the alliance establish stronger ties and a more pronounced presence within the area. Very much in line with BestCities practice, MCB is committed to constantly evolving and reviewing its standards and undergoes an annual audit associated with ‘Q de Calidad Turistica’ – a quality certification for tourism services in Spain. Since 2012 MCB has passed the audit with flying colours, cementing its dedication to continually improving standards in its workings.

Madrid has been committed to improving its sustainability with various programmes aimed to target this issue including City Hospitality Desks which help to control the wastage of unused city brochures through a dedicated delegates desk at conventions. This has grown massively with 11 meetings serving over 18,000 delegates supported this way in 2016. Ambassador programmes are also a key investment for the MCB with its own platform that identifies individuals within areas including non-for profit, NGO’s and universities that have helped secure meetings in Madrid.

The BestCities partnership will support the MCB in acquiring knowledge in legacy development and position Madrid as innovative leaders in this field, alongside the other BestCities’ partners: Berlin, Bogotá, Cape Town, Copenhagen, Dubai, Edinburgh, Houston, Melbourne, Singapore, Tokyo and Vancouver.

The MCB is the first destination to go through BestCities’ revised quality management system (QMS). With admission into the Alliance a guarantee to clients that the vital commitments to excellence such as venue capacity, international accessibility and infrastructure framework are a given, the new QMS further extends BestCities offering beyond the key convention elements a city must possess to host world class events. With a focus on advancing the purpose of meetings through vital areas including sustainability, accessibility and legacy development, it adds a further dimension and unique strength to its partner cities’ offering.

BestCities Board Chair, Jonas Wilstrup from Wonderful Copenhagen commented on the new signing:

“Madrid is a world class destination for conferences and events and we’re ecstatic to be welcoming them onto the BestCities Global Alliance. Madrid’s successful submission truly cements BestCities dedication to setting industry standards which we hope to help build with them over the next few years.

“Our dedication is to providing customers with seamless, worry-free services across a global network of cities. As our twelfth member, Madrid will enable us to continue to build the long-term loyalty by adding value through contributing to the cause of meetings. We’re excited to be able to offer our expertise particularly within this area.”

“MCB trust that becoming a member of BestCities will enrich our knowledge as a convention bureau by embracing their ethos for commitment to excellence. In short, our aim is to guarantee that each congress held in Madrid will be a unique and successful experience made possible through the close working of our organisations.”

For more information on BestCities and its upcoming events including the BestCities Global Forum in Tokyo (4-7 December 2017) visit www.bestcities.net  @BestCitiesGA