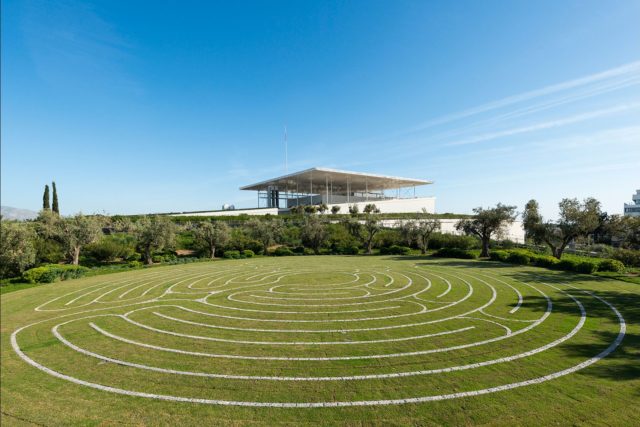 Under the roof of the building, which is the work of the Italian ‘starchitect’ Renzo Piano, the National Library and the State Opera will function as the main institutions, with the hall of the State Opera boasting excellent acoustics. Alongside the centre a park that also bears the name of Stavros Niarchos extends to over 210,000 square metres.

The realisation of the centre was the largest construction project in Greece after the Olympic Games hosted in the city in 2004. The building is set on the site of the former hippodrome and an Olympic car park in the seaside town of Kallithea.

Renzo Piano is an unusual architect – although it might appear that he creates Zen-like architecture (which is his outer view on life) in a particularly calm way, his architecture is generally considered radical. Together with the British architect Richard Rogers, he was celebrated as a co-creator of the Georges Pompidou Centre in Paris, at the time (in 1977) considered the most controversial building in Europe and which has long been regarded as the most provocative example of contemporary architecture.

Piano has also designed an airport terminal on an artificial island in the Gulf of Osaka, in Japan, and effectively positioned the California Academy of Sciences in San Francisco underground; in Rome one can find his fascinating Parco della Musica – an auditorium that looks like a group of hills on which the eternal city of Rome lies; he also docked his green ship in Amsterdam, the Netherlands, in which space was given over to his Museum of Science and Technology; and his vertical city of the Shard, opened in London in 2012, was quickly recognised as the tallest tower in western Europe. All of these projects unquestionably set Renzo Piano amongst the family of the greatest contemporary European architects.

Piano is not an architect who would seek attention or simply ‘gesture’ with his architecture; his goal here has been to achieve perfect harmony and with the SNFCC, in our opinion, he has succeeded superbly. The special achievement of this work is a design that is reminiscent of a paper-thin roof above the lighthouse, which was immediately nicknamed ‘a flying carpet’. It is an engineering miracle, especially remarkable for being only 2cm thick and the largest roof of this type in the world that is built from reinforced concrete.

The enormous span (10,000m2) is covered with photovoltaic cells, thus ensuring sustainable energy that is sufficient for most of the needs of the building, adhering to the modern principles of sustainable construction.

THE AGORA CONNECTING THE OPERA AND THE LIBRARY

In the spirit of Athenian and Greek tradition, the centre of the new object is the Agora, which is a place for socializing, dialogue and, at the same time, the main entrance to an impressive building. Today the centre is already a lively crossroads of the citizens of Athens out to enjoy a quality space that is defined by its water channel running along the entire length of the building and symbolically connecting the building with the nearby bay. This canal is also a recreational area where kayaking and sailing can be enjoyed in smaller boats.

The Opera building is five storeys tall and contains all of the necessary facilities for the operation of this important national institution. The heart of the building is an exceptional hall, which hold audiences of 1,400 and is lavish, also with its superb acoustics. The red coloured shades in the hall appear powerful, passionate, warm and full of vibrant energy.

The large hall is complemented by a minor stage for audiences of 400 and it is dedicated to contemporary musical and dance productions, as well as ensemble practice.

In the library on the opposite side of the Agora, a rich aspect of Greek literary cultural heritage is soon to move into a chamber intertwined with massive bookshelves reaching right up to the ceiling, and in accordance with the philosophy of the whole architecture also opening outwards through glass walls. The first two floors are intended for visitors and as a study room, and even today, when this part of the building has not yet been formally opened, it is still full of every generation eager to socialize in a quality environment.

A LIGHTHOUSE FOR EVENTS

At the top of the park there is a central space for events, called the Lighthouse. The view through the glass walls extends all the way to the urban parts of Athens and, on the other, to the large Flisvos marina and beyond to the Saronic Gulf. It is not surprising that event managers immediately adopted this venue and during our visit there the preparations for a major corporate event were taking place. A photogenic staircase that leads from the Lighthouse to the park is especially suitable for fashion shows and has already been made use of for that purpose.

There are small conference rooms within the premises of the new library, with the larger hall in an industrial style accommodating up to the 200 participants. The airy and flexible conference rooms are complemented by several smaller meeting rooms and supported by catering facilities.

The Mediterranean Garden, designed by New York Landscape Architect Deborah Nevins and stretching over an area of 20 hectares, was a particular feature of the complex that became popular with event organisers immediately after the opening, but the complexity of architecture and the spaces is so vast that the event team is still constructing the whole story and discovering new possibilities offered by the centre through the implementation of individual events.

It will take some time before Athenians accept and embrace the building; the dilemmas about the meaningfulness of such a project are part of the democratic spirit of an exceptional city. With all of the institutions the building will employ almost 900 people when in full operation. However, although the country has gained an exceptional public space and facility it will be a significant burden for it, as it has taken the building into management.

In any case, the fact is that event organisers and planners immediately and without prejudice accepted the centre. According to the centre’s team, the premises intended for events are already sold out to the end of the year and beyond. We believe that the new building will revive the coastal part of Athens, which remained largely neglected following the Olympic euphoria. In the spirit of science, development and art, it is directly related to the organization of events as a place of meeting, socializing and tolerance. And also symbolically as a part of the re-launch of the Athens congress industry.

Stavros Spyros Niarchos was born July 3, 1909 in Athens. He studied law at the University of Athens and began working in 1929 in his family’s grain business. Recognizing the substantial transportation expense in importing wheat, Niarchos believed that one could save money by owning the ships that provided the transportation. Consequently, he bought his first six freighters during the Great Depression.

For many years, he owned the largest private fleet in the world, with his company operating more than 80 tankers and other vessels.

In 1956, Niarchos agreed to build and operate the Hellenic Shipyards, the first such private investment in Greece, which rapidly became the largest Mediterranean shipyard. In 1985, the shipyard was placed under state control, but Niarchos’s commitment to Greece still stands today as an effective demonstration of the power of private investment for the country’s economic well-being.

Niarchos’s legacy continues into the twenty-first century with the establishment of the Stavros Niarchos Foundation. Working in Greece and internationally, the Foundation began its grant-making efforts in 1996 and it derives its mission from Niarchos’s commitment to Greece and Hellenism, as well as his keen instincts and interests in support of causes in the fields of education, social welfare, health, and arts and culture.