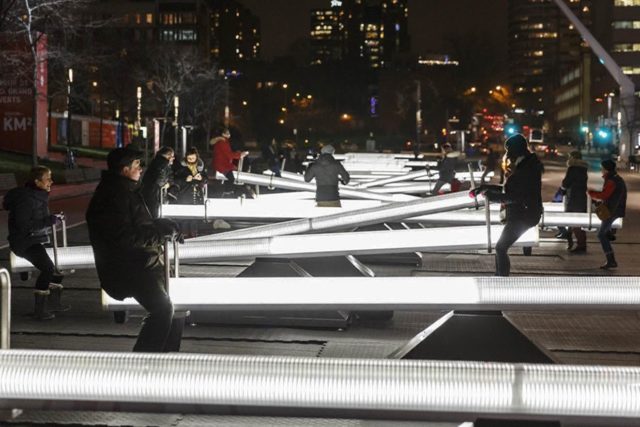 The Mayor of London, Sadiq Khan, said: “The incredible line-up of artworks announced today gives a flavour of what an amazing and international festival Lumiere London 2018 will be. Even bigger, brighter and bolder than its inaugural event, we will see some show-stopping installations reimagining London’s iconic architecture and streets.”

“I’m also delighted that this year we are organising community projects in outer London boroughs to ensure that as many Londoners as possible can get involved with this world-class event. Festivals like this showcase London at its international, creative and open best.”

Commissioned by the Mayor of London, and produced by arts charity Artichoke, Lumiere London is the capital’s largest art event and is free to attend, receiving major support from London & Partners, London’s West End, King’s Cross and Bloomberg Philanthropies with additional support provided by a host of partners and funders including Wellcome, The Fitzrovia Partnership and the Victoria, South Bank and Waterloo BIDs, Cain International, Marriott and Universal Music.

Following the spectacular success of the first Lumiere London in January 2016, which saw 1.3 million visits over the four nights and a visitor spend of £22m, the nocturnal festival is designed to lift the spirits in the darkest days of winter and show the city in a new light. More than 40 artworks made using the medium of light, will explore the city’s most iconic buildings, landscape and architecture. The festival features artists from across the UK, France, Germany, the Netherlands, Spain and Canada amongst others. Bigger, brighter and bolder, the second edition of Lumiere London extends from North to South across the River Thames through six areas: King’s Cross, Fitzrovia, London’s West End (including Carnaby, Chinatown London, Leicester Square, Mayfair, Oxford Circus, Piccadilly, Piccadilly Circus, Regent Street, St James’s, St James’s Square, St James’s Market and Seven Dials), Westminster & Victoria, and Southbank & Waterloo.

Londoners will also have the opportunity to take part in the creation of a number of festival artworks. The London Boroughs of Greenwich, Lambeth, Redbridge and Waltham Forest will be supporting a programme of community activities to help produce a series of choreography and performance workshops to create the glowingly beautiful Umbrella Project by Bristol-based Cirque Bijou, roaming artworks that will pop-up in Piccadilly and Fitzrovia locations during the festival. They will also help create Bottle Festoon, installations of shimmering chandeliers made from recycled plastic bottles as well as.

Bottle Festoon will also be supported in Croydon, by The Croydon Partnership, as part of a one-day light festival taking place on Thornton Heath following Lumiere London at the end of January. The Thornton Heath light festival will also give Londoners a further opportunity to see a version of Leicester Square’s extraordinaryNightlife commission, created by Jo Pocock and the Lantern Company for Leicester Square Gardens, which celebrates the wonders of the natural world, creating a wild space in the heart of the city. Lanterns from this work will transfer to the Thornton Heath light festival, supported by London Borough of Croydon.

Helen Marriage, Artichoke CEO and Lumiere London Artistic Director, said: “It’s exciting and unusual to be working at this scale and Lumiere London is more than a light festival. It’s an exploration of the city by artists and audiences that transforms our public spaces from King’s Cross to the Southbank via London’s West End, Mayfair, Victoria and Waterloo. From the playful to the thought-provoking, the artistic programme will present our city to the world as a public gallery without walls.”

Andrew Cooke, Acting CEO of London & Partners, said: “The range of international artists involved in Lumiere London highlights London’s status as a vibrant and multi-cultural city buzzing with creative energy. We are looking forward to welcoming visitors to explore some of London’s more and less familiar landmarks and neighbourhoods in a totally new light.”

Ben Stephenson, CEO of WeAreWaterloo, said: “We are delighted to host some spectacular Lumiere installations in the South Bank and Waterloo, including Emma Allen’s work in Leake Street under Waterloo Station. The ever-changing street art in the tunnel provides the perfect backdrop for Emma’s stunning animated portraits, and is a great place to start or end your Lumiere journey.”

Councillor Nickie Aiken, Chair of the West End Partnership said: “Lumiere London puts a global spotlight on London’s West End, an unrivalled visitor destination and the beating heart of the capital, attracting international visitors from China, the US, Europe and beyond to explore the West End’s spectacular light displays. From the iconic Leicester Square to Mount Street Gardens and St James’s Market, we will be illuminating hidden gems, globally renowned streets and iconic landmarks this January.”

“We look forward to welcoming people from across the UK and around the world to this stunning festival of light and hope they stay to explore the extraordinary centre of culture, entertainment, dining, hospitality and retail that is the West End.”

Anna Strongman, Partner, Argent (King’s Cross), said: “We are delighted to be taking part in Lumiere London once again and looking forward to seeing King’s Cross transformed into a canvas of colour and light. Visitors to this year’s show will be able to enjoy a vibrant mix of shops, bars and restaurants including all of our new retailers on King’s Boulevard, whilst exploring the installations which have been designed to complement the mix of new and restored spaces and places transformed over the last 10 years. We look forward to welcoming old friends and new visitors to King’s Cross during the festival.”

Lee Lyons, Chief Operating Officer, The Fitzrovia Partnership, said: “The collaboration between art and science represents the wider community in Fitzrovia and brings with it a unique piece of artwork for our first year’s involvement in Lumiere”.