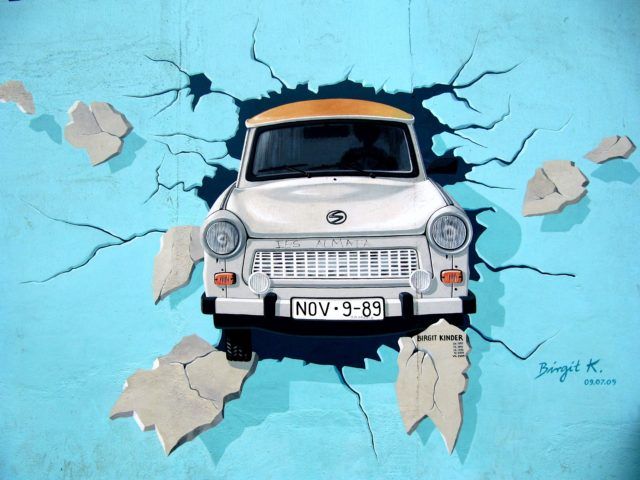 A short history of Trabant

The Trabant is an automobile which was produced from 1957 to 1990 by former East German car manufacturer VEB Sachsenring Automobilwerke Zwickau. Trabant means “satellite” or “companion” in German, derived from the Middle High German drabant (“Hussite foot soldier”). The car’s name was inspired by the Soviet Sputnik satellite. The cars are often referred to as “Trabbi” or “Trabi”.

Trabi is often seen as symbolic of the former East Germany and the collapse of the Eastern Bloc in general. Produced without major changes for nearly 30 years, the Trabant became the most common automobile in East Germany and in Hungary as well.

Called “a spark plug with a roof”, 3,096,999 Trabants in a number of models were produced over nearly three decades with few significant changes in their basic design. Older models have been sought by collectors in the United States due to their low cost and fewer restrictions on the importation of antique cars. The Trabant also gained a following among car tuning and rally racing enthusiasts.

A decade ago while walking around Budapest, one could still see a lot of Trabis parked around. Through years, though, there were less and less to be seen, also on the ground of new environmental regulations for Trabants’ engines produced a very smoky exhaust and were a significant source of air pollution. So being in Budapest today, a congress or business guest, hoping to see this monumental car from the communist past riding around, will be pretty disappointed. Trabis have in recent years became more of a collection item than a driving vehicle.

However, a few incentive and team-building agencies in Budapest offer programmes where attendees can get in touch with this special relic from the past. And one of the most interesting ideas for getting in  touch with Trabis is to collectively paint them. The Trabis become a white canvas for a Trabant painting programme. This programme contains elements of retro dancing (even on top of the Trabis), retro fashion-show to the greatest hist of the 70’s and 80’s while leading towards the major goal of the teamwork: to create the nicest and the most exciting artistic composition with the tools at the team’s disposal.

Each of the teams has to paint their own Traby. The white cars are painted in exciting colours with the paint, paintbrushes and sprays provided, and by, of course, wearing protecting clothing. Creativity, conformity and handcraft come in this programme to light. The most beautifully painted, the most colourful, and the most creative Traby gets awarded too. Every team has to paint its Trabi according to individual ideas and conceptions and, most of all, is expected to have fun. These old communist era cars look completely wacky and utterly wonderful when all painted up.