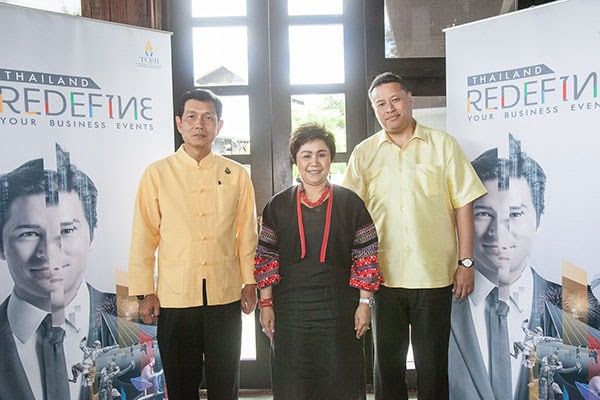 “TCEB’s efforts to promote Chiang Mai alongside the city’s public and private sector partners are paying off. The number of ICCA-endorsed international conferences hosted in Chiang Mai has risen sharply, following the opening of the Chiang Mai International Exhibition and Convention Centre (CMECC) in 2013. From a mere 10 events in 2013, to 21 events in 2017, and 25 events in 2018, this represents over 250% growth in five years,” Mr. Chiruit said.

Mr. Chiruit added: “TCEB is showcasing MICE Events in the Rain in our role as partner and collaborator which allows the flexibility to orchestrate ideas and programmes to encourage MICE groups to visit Chiang Mai during the Green Season. The city’s variety of resources combining modern facilities with creative ideas and unique culture can redefine MICE traveller’s business experiences as demonstrated to the media through activities at the Patan and Loang Him Kao communities under the collaboration with Chiang Mai province.”

Thailand hosted 193 ICCA-endorsed international events in 2018. These included 25 events held in Chiang Mai, or a 12.95% share, placing Chiang Mai on the second place after Bangkok with the highest number of ICCA-endorsed events. In addition, Chiang Mai’s ICCA 2018 Ranking climbed to 25th place in Asia from 27th in 2017, and 110th in the world from 130th. Moreover, Chiang Mai is the 7th top city in ASEAN with the highest number of conventions in 2018.

In 2018, Chiang Mai recorded 2.6 million visitors, including 2 million from China, thanks to more than 200 direct domestic and regional flights operated by 26 airlines bringing on average 40,000 visitors per day to the city, according to Mr. Komson Suwanampa, Vice Governor of Chiang Mai.

“As well as the strength in terms of transportation; complete with air, rail and road networks, Chiang Mai has a number of state-of-the-art venues including the CMECC which can handle over 10,000 convention delegates. There are also several five-star hotels with enough number of rooms to accommodate MICE travellers year-round, especially during the “Green Season,” Mr. Komson said. “MICE development forms part of Chiang Mai’s overall tourism strategy which requires collaboration from all stakeholders in the public and private sectors to stimulate travel.”

Mrs. La-iad Bungsrithong, President of the Thai Hotels Association (Northern Chapter), added “Chiang Mai is home to several of TCEB-endorsed Thailand MICE Venue Standard (TVMS), including 57 meeting rooms of 16 venues, one special venue and one exhibition hall. In addition, the city offers a wide range of venues, ranging from hotels and meetings complete with modern facilities to creative venues and a diverse range of activities and attractions that can redefine business experience, pre- and post-events.”

Going forward, TCEB will continue to partner and collaborate with Chiang Mai Province under the “Thailand 7 MICE Magnificent Themes” project to develop more new MICE routes to give local partners unique selling points that appeal to international MICE travellers. Meanwhile, the Lanna Expo 2019, currently taking place at the CMECC, from 28 June to 7 July, is further strengthening the city’s position as a platform to promote local arts, crafts while adding an important revenue stream to the northern region’s economy.