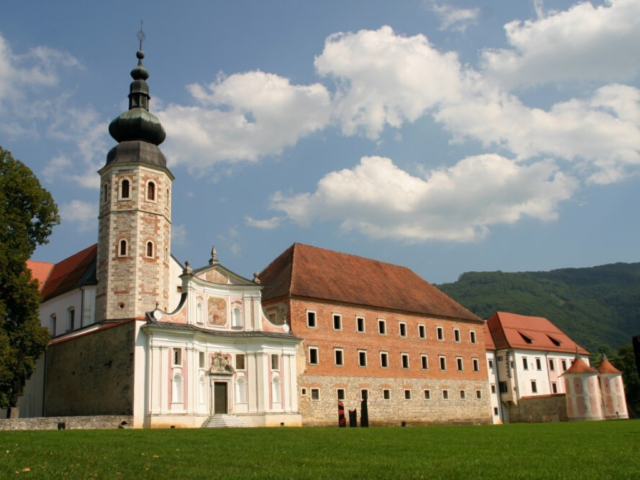 In 1234, shot away from the historic centre of Kostanjevica na Krki, the Cistercian Monastery Well of the holy Virgin Maria (Fons Beatae Virginis Marie) was founded. It was created by Bernard Speinheim with the wish to strengthen his authority on his new territory on the lower part of the river Krka that boards to Croatia and Hungary. In 1249, with a second founding charter, it gained a leading position over the parish of Kostanjevica and 11 other in the vicinity and so it became the religious, cultural and economic centre in the lower part of Krka. The importance of the monastery for its founder is shown by the fact that his wife and one of his sons are buried here.

Church fittings and altars were taken away or sold after the abolition of monasteries by Emporer Joseph II in 1786. After this, the monastery buildings began to decay and were eventually burnt down in 1942. Renovations began in 1958. By 1971 the church had been rebuilt, by the Slovenian Institute for the Protection of Cultural Heritage. It no longer operates as a monastery, instead is devoted purely to secular activities. It is also home to the Božidar Jakac Gallery, which opened there in 1974.