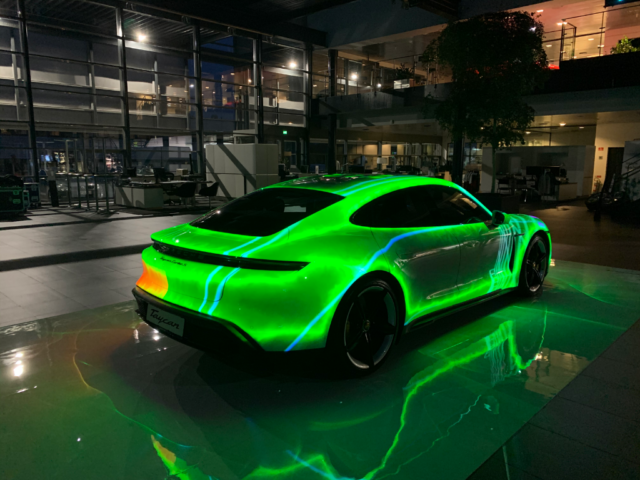 Prestige car manufacturer Porsche launched its new all-electric Taycan Turbo S sports car for the Danish market at the Porsche Centre Copenhagen in January. In keeping with the electric theme, Hippotizer Media Servers powered the electrifying video-mapping of the car’s exterior at the special event, which was produced for Porsche by Capital Events.

Copenhagen-based projection specialist 4K Projects, brought in by technical supplier Nordic Rentals, were responsible for the gleaming visuals. They supplied a Hippotizer Boreal+ for the playback, along with a second unit as backup. The graphics and video content was fed from a single 4K output, through a Datapath FX4, which split the output into four HD feeds.

4K Project’s production team was made up of Mikkel Samuelsen, Balder Thorrud and Rasmus Linck, who designed the video content to complement a soundtrack created by Porsche, especially for the launch. The projectors covering the left and right sides of the car were rigged to cover the roof as well, while those aimed at the front and back of the car were masked in that area to avoid overlapping pixels.

“The car was positioned in the middle of the exhibition room with four projectors, one aimed at each side of the car – front, back, left and right,” explains Samuelsen. “The projectors were flown about five metres above the ground and angled at around 35 degrees so that they could hit the roof of the car as well as the sides.”

With a quick turnaround required, Samuelsen says Hippotizer’s streamlined workflow helped them to achieve results in super-fast time. “We created our final 3D model and UV maps out of references and other 3D files using SideFX Houdini and Maxon Cinema4D,” he says. “That meant we could work easily in After Effects and clearly distinguish each part of the car, just like you would with a regular LED pixel map.”