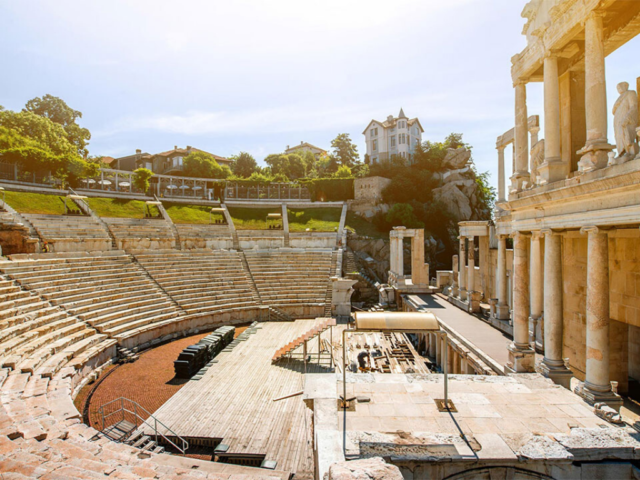 Plovdiv, Bulgaria is one of Europe’s oldest continuously inhabited cities. Nestled on the Maritsa River, in a valley between the Balkan and Rhodope mountain ranges, the Neolithic settlement became an important Thracian population centre, and then the Roman provincial hub known as Philippopolis.

Due to its economic and cultural significance, Philippopolis enjoyed the benefit of Roman construction and development, including this theatre built in the saddle between two hills overlooking the ancient city. Originally built to accommodate an audience of 5,000-7,000, the subsequent centuries of history (Byzantine, Ottoman, “Eastern Rumilia,” Eastern Bloc) figuratively and literally buried this classical structure, until it was rediscovered thanks to a landslide in 1970.

Originally built under the reign of Emperor Trajan, the theatre in Plovdiv still bears many striking details, including municipal district names carved into benches so that citizens would know where to sit and several walls and steles inscribed in Byzantine Greek (indicating an official policy of Hellenization — rather that Romanization — of the province). The rediscovery and subsequent restoration of the theatre is considered one of the crowning achievements of Bulgarian historical conservation. During the summer, the theatre still hosts plays and musical performances. It has also served as the site for modern Zumba parties, and the awards ceremony for the 21st International Olympiad in Informatics.