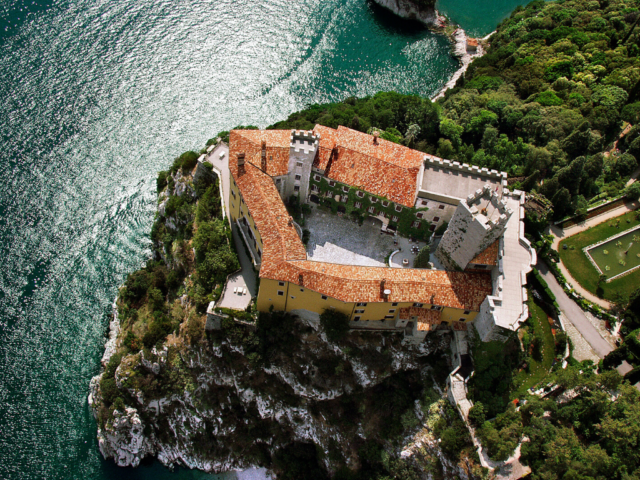 The Castle of Duino was erected during the 14th century on the ruins of a Roman military outpost and during the 17th century, it began to acquire its status as a cultural and humanistic centre, one that it maintains to this day. It has hosted a number of prestigious guests: Elisabeth of Austria (Sissi), the Archduke Franz Ferdinand of Austria, the Counts of Chambord, Johann Strauss, Franz Liszt, Hugo von Hofmannsthal, Gabriele d’Annunzio, Paul Valery or, most important of all, the poet Rainer Maria Rilke, who composed the first two of his famous “Duino Elegies” while staying at the Castle.

The Castle of Duino is a fascinating location where it is possible to organise weddings, gala dinners or congresses. Art exhibitions, concerts, theatrical performances, eno-gastronomic gatherings are also hosted periodically. The Castle can also be rented as location for films or photo-shoots.

The Bunker of the Castle of Duino has an area of 400 square metres and is 18 metres deep. It was constructed in 1943 by the forced-labour organisation TODT for the German navy to defend the naval base of Sistiana against a possible Allied attack. The Bunker was used as an air-raid shelter for the people of Duino before it was armoured with a cannon by the Germans. From 1945 to 1954, it was used by the Brits as a fuel store. The Bunker was opened to the public by the Princes della Torre e Tasso in March 2006 to witness those tragic years.