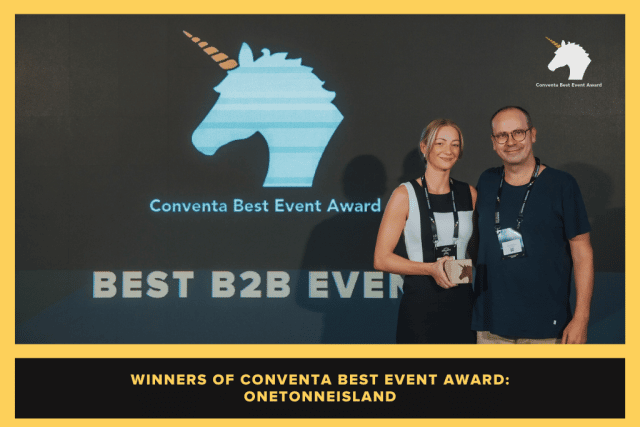 The distinguished competition for the best events in New Europe, the Conventa Best Event Award, awarded the most innovative, sustainable and trailblazing events in 2022. Innovative projects facilitated the development of the meetings industry and ushered in a new era for the meetings industry. OneTonneIsland was head and shoulders above its competition and won awards in the B2B category, Best in Sustainability and the Grand Prix Award.

Conventa Best Event Award 2022, the annual competition that awards the best events in the region of New Europe, came to a successful close. The competition’s grand finale took place on 26 August 2022 at the Conventa Crossover conference in Grand Hotel Union Eurostars, where the winners were announced. Four winners were selected; the best B2B, B2C, B21, and CROSSOVER events. Furthermore, five special awards were presented at the award ceremony.

To launch a new app for measuring carbon footprint, and to increase the number of users, Bang Agency created OneTonneIsland – a PR activation where the entire island of Grinda in the Stockholm archipelago was made climate-smart.

Each Swede emits an average of approximately nine tonnes of carbon dioxide each year, which is too much to meet the long-term climate goals. Ideally, each person on the planet should not let out more than One Ton of carbon dioxide each year. That’s why Vattenfall developed the free app OneTonneFuture (OTF). With the help of the app, you can calculate your climate footprint and see how you can have a positive change in the climate. To launch the app, Brand Arena Nordic Group created OneTonneIsland – a PR activation where they made the entire island of Grinda in the Stockholm archipelago climate-smart. The brand OneTonneFuture was unknown and needed to be put on the map for decision-makers in different parts of society. The goal was to go from 5,000 users and subscribers to 10,000 users of the app in three months and to have satisfied a minimum of 80% of the visitors of OneTonneIsland.

The event was 100% carbon neutral and a total of 250 guests came to OneTonneIsland. As ambassadors, they have spread the brand to more than 15,000 people via their individual networks. The organisers exceeded the goal by 100%. The goal was 10,000 users and they achieved 20,000 users. After 6 months the app has over 250.000 downloads and in the next few years, the app will be launched in another 7 countries. Over 98% of the participants of the event were very satisfied with the event experience and say that they want to continue participating in similar events in the coming years.

The date for next year’s Conventa Crossover has been announced. The event will take place from 28 to 29 August 2023.