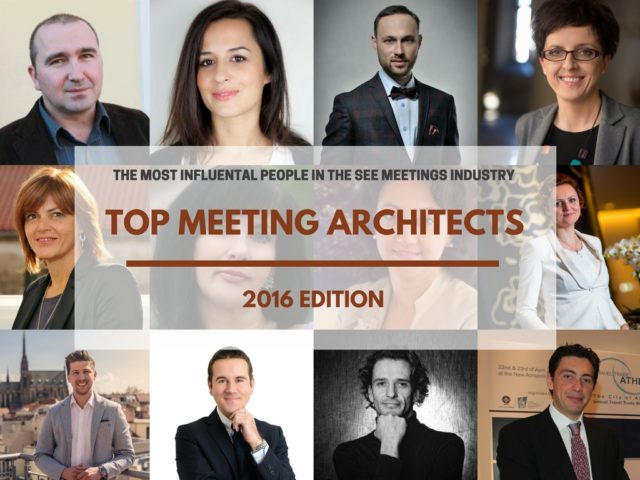 Have you ever wondered just who might be the top influencers in the Central and South East Europe Meetings Industry? As the industry rapidly evolves, it’s clear that some key influencers actually have the same reach and draw as big companies, so individuals matter in a way that has never been possible before.

Based on 460 completed surveys, Kongres magazine has analysed and shortlisted the TOP 45 most influential people in Central and South East Europe in 2016. They have all contributed to the development of the region and our readers have chosen the best of the best. We have also added 2 newcomers in each category, voted by our readers.

In 2014 Efi Koudeli was elected as the new General Director of the Thessaloniki Convention Bureau and since then she has carried out many important projects. Hardworking and enthusiastic, Efi has helped in the worldwide promotion of Thessaloniki as a meeting destination. Before her election she gained experience at the Greek-Turkish Chamber of Northern Greece, IATA and the Greek National Tourism Organisation.

Krysztof has a rich history of experience in the meeting industry and from 2009 to 2011 he was active in the MPI Poland Club and has been as international volunteer in the MPI International Board of Directors (2012-2015). As a journalist in the meetings and events field he has also published more than 100 articles. Krysztof has been the head of the Poland Convention Bureau since 2010 and besides this important role he shares his knowledge with a younger generation in his role as a Vice-Rector at the Warsaw School of Tourism and Hospitality.

Active for a decade as the director of the Slovenian Convention Bureau, which enjoys an outstanding reputation abroad, he continually nurtures the growth of the Slovenian meetings industry through a number of innovative marketing and CSR projects. The editorial board has put a particular emphasis on the Conventa project that, as a brand, has become synonymous with the SE Europe congress product and has significantly assisted with the placement of the region on the meetings planners’ list of key destinations.

Alexis Galinos is a development economist and in economic development matters has been an advisor to the Municipality of Athens since 2003. He has led the establishment of a municipal agency whose objective is the management and implementation of tourism and economic development in Athens, and he served as the organisation’s first Director-General from 2005 to 2007. He holds a Master’s Degree in Public Administration from Harvard University, an MSc in European Social Policy from the London School of Economics and Political Science and a BA in Economics from Bates College.

Tatjana Radović has a number of candidacies under her belt that she has prepared with passion and dedication in her veins. In carrying out her role she has been linking key Ljubljana meeting suppliers for a number of years now, which this year came together in the Ljubljana Strategic Bidding Team. This has given an additional boost to the work of connecting with the Slovenian Convention Bureau and to a number of important projects of associations obtained for the coming years.

A graduate of the Jagiellonian University (Polish Philology) and postgraduate studies in the field of EU funds, she was at the Department of Information, Tourism and Promotion of the City since 2004 and participated in projects in the field of tourism, such as “Royal Road for disabled tourists” and “Museum product in selected cities around the world – promotion of museum routes in Europe.” Since 2013 she has been the head of the Krakow Convention Bureau.

With a wide range of activities he is charged with getting Zagreb on to the congress market. It is to his credit that Zagreb is today a modern and distinctive convention destination. Through active participation in all of the regional and international initiatives Zagreb is today a stable, growing congress destination, which over the last few years has been steadily increasing its market share in the associations and corporate markets.

The director of Dubrovnik Convention Bureau and with many solid years of experience in business behind her, she has accelerated the promotion of Dubrovnik to now being the region’s most recognizable congress brand and a player in the European premier league for congresses and events. Dubrovnik could rightfully claim that 2013 was its year on the conference scene, as almost every important event of that year was held in this very beautiful city, among them the meetings of NATO, the FIS International Ski Federation, FIA – International Automotive Association, and FIFA.

Özgül Özkan Yavuz was promoted in 2014 to be the new General Manager of the Istanbul Convention & Visitors Bureau (ICVB). From 2008-2010 she was the Director for Tourism and Promotion at the Istanbul 2010 European Capital of Culture Agency, where she was primarily responsible for the international promotion of the programme.

Roman Muška has been working in the MICE field since 1996, gaining extensive experience in tourism, and takes on the position of Managing Director with the objective of meeting the PCB long-term strategic plans, such as attracting a larger number of international meetings in Prague, building a positive image of Prague as an attractive convention destination abroad and, last but not least, raising the awareness of the congress industry and its economic and non-economic impact in the Czech Republic.

Newcomers in 2016, voted by readers

As an engineer of tourism management from the University of Economics in Bratislava she acquired extensive experience in tourism, services, management, PR and marketing. Now head of the Bratislava Convention Bureau she is responsible for development and execution of a long-term communication strategy for Bratislava while developing a networking platform for the MICE community in her hometown. She is a great brand ambassador with strategic thinking and a holistic approach, keen on travel and gastronomy.

After graduating in Tourism at the Faculty of Economics, Mendel University Brno, his first tourism outing was with the Prague Convention Bureau, where he completed an internship. Soon after he joined the dynamic team at the Moravia Convention Bureau. As a project manager he offers full support to organisers of events in equal measure to assistance and independent, complex information for planning MICE events.