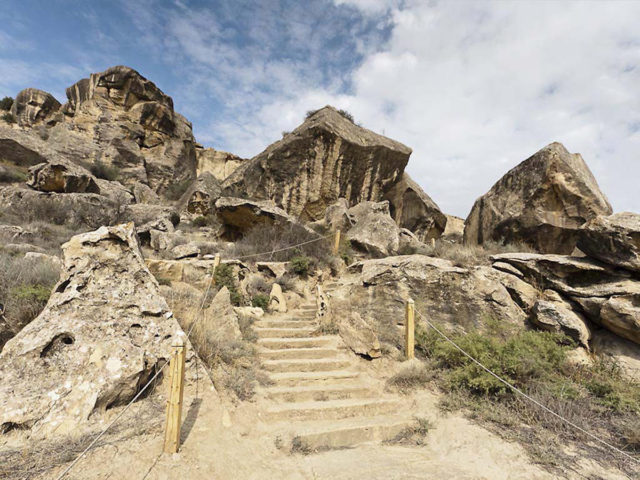 An alien-like landscape with mud volcanos and prehistoric petroglyphs is not the first thing that comes to mind when you think about Azerbaijan. The Gobustan National Park, located 70-kilometres from Baku is known for its perfectly preserved rock paintings and carvings – petroglyphs dating back over 15,000 years. The reserve has more than 6,000 rock carvings depicting  primitive people, animals, battle-pieces and ritual dances.

Mud volcanoes are not really volcanoes. They are cone-shaped formations with craters that look like real volcanos. Methane and carbon dioxide gases released from deep within the Earth cause Gobustan’s mud volcanoes to keep bubbling, painting ground grey and black. On average, every twenty years, a mud volcano may explode, depositing tonnes of mud on the surrounding area.

We reccomend that you start the expedition to Gobustan in the interactive museum, where you will get special insight into the geography, nature and history of the region. There’s plenty of tour providers that will take you to Gobustan and make your trip much more interesting and exciting.