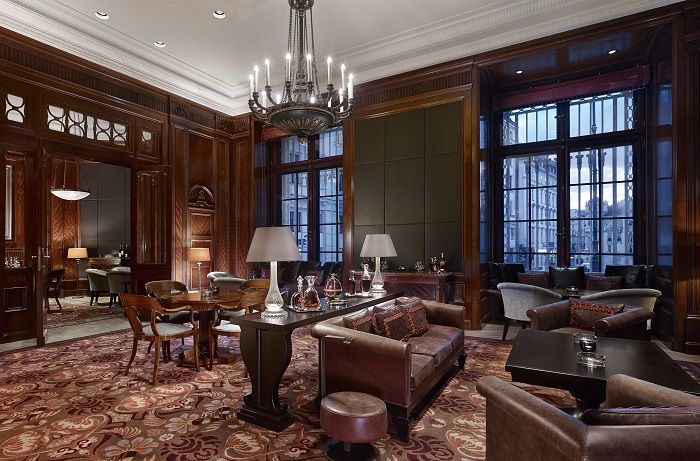 When in 1855 Anshelm von Rothschild founded the Bank CrediAnstalt he probably did not think that the neo-classical building would one day be a hotel. At one time the largest Austro-Hungarian Bank, a mighty bank building was built from 1913 to 1915 at the renowned location.
Today, the prominent building has been renovated into a superior hotel of the legendary brand in one of the top spots of the city: the Golden Quarter. The hotel is surrounded by a street of prestigious shops and historical sites. We had the opportunity to be among the first to get behind the scenes to look at the hotel and to present you with the (heart) rate of this remarkable temple of hospitality.

As the building is monumentally protected, the architectural bureau of Neumann & Partners had a challenging task to renovate the outside and the interior of the hotel and address a number of its interesting details. The result is an unusual and elegant hotel, which has nothing resembling the ‘prêt-a-porter’ hotels. Each and every detail is carefully designed, renovated and packaged into a new function. In the zone where bank officials used to sit behind countertops is today an elegant restaurant, the Bank, with free flow cuisine. Perhaps the best embodiment of the story of the hotel is the spa centre Arany, which connects the hotel with its banking history. Set in the former bank vault it is unique among hotel spas. The 15-metre swimming pool gives you the feeling that you are floating above golden bars. The renovation has completely succeeded and it is the icing on the cake of Park Hyatt hotels’ worldwide philosophy – they are usually located in historically significant buildings with a ‘story’.

The special personal treatment of Hyatt standards starts upon entering the hotel. One soon feels this on one’s skin; a friendly concierge taking care of all the details and making a good first impression, professionally presenting technological solutions in an elegant hotel room. This is Old Viennese School at the highest level. The intelligent management of sophisticated devices includes a rarely seen gadget to electronically control water temperature in the bath, with other gadgets offering complete electronic control of the room operating smoothly, intuitively and being generally user-friendly. The luxurious minimalism, elegance, attention to detail and nice colour combinations delights – space in the room is sumptuously measured; just by touch all of the pieces of furniture can be felt to be of the highest quality and seem like they will last forever. Boutique cosmetics Blaise Mautin, which is only available in the Park Hyatt Hotels, aromatically rounds up the whole experience in the rooms.

Stability, energy efficiency and cutting edge equipment are only part of a complex story of the management of a hotel such as the Park Hyatt. As the head of maintenance engineer David Gnilka told us, a big challenge was to establish an intelligent system for managing the hotel in a historical building, which would allow optimal use of energy. Given the built-in systems the hotel is green and this part of the story is a part of the standard that guests today understand as a normal solution. Engineer Gnilka joined the hotel’s team only three months before the opening; before he had been already working in the Park Hyatt Hotel in Zurich and the Grand Hyatt in Dubai.

The innovation of the renewal is best noticed in the legendary congress hall, which after renovation is exactly as the original hall was; the super-modern digital technology is hidden in the background and one genuinely does not notice it. The renovation was particularly difficult, because the Not the building is UNESCO heritage, the first district in Vienna is UNESCO world heritage. Acoustics of the hall are top quality and certain technical solutions, such as in the fireplace hidden television, are stunning. Among the technical ‘pearls’ there is the possibility of streaming hire solution video in rooms, which allows for following the meeting from hotel rooms. The team are looking forward to the first dance, where all the technical superiority of the hall will come to full expression.

Vienna at 5 o’clock in the morning: in the main kitchen of the Park Hyatt they are starting to prepare food based on local ingredients. Head Chef Stefan is checking local suppliers. One of the small details that will be noticed by guests at breakfast is the neatly packaged honey sourced from the Vienna surroundings and under the brand name “Honey from Heaven”, with the signature of the beekeeper who produced it. Even the chef, who was involved in setting up the kitchen, cannot hide his fascination with modern technology, in particular being especially proud of the furnace, in which a variety of desserts and other dishes are created in front of the guests.

The very youthful team at the front desk has had several months of training, and hence it is acting in tune, friendly and professional. Philipp Fleming is the one to whom the guests’ comments come first. About a month after the opening of the hotel he reads us an e-mail of guests who were impressed by the reception. Not only did he welcome them kindly and help them settle in to the hotel, even when they accidentally met in the street he was equally helpful and friendly.

In a hotel such as the Hyatt Park is different standards apply. If in an average hotel the time prescribed for cleaning rooms is 20 minutes, in this hotel it is 50 minutes. Certainly the prestigious materials, such as marble and parquet, require greater attention. As Philipp Fleming says, even in Vienna it is difficult to find enough staff with experience with cleaning of hotel rooms of the highest category.

For a long time the image of a man with a cigar in one hand and a glass of a well-selected drink in the other was a dream. For such a “mancation”, the Living Room, which awakens all the senses and is among the better stacked in Vienna, is ideal.

A unique blend of tradition and modernity. A temple of the best hotel aesthetics, which is essentially intimate, respectful of the history and sophisticated, and not at all boastful. All of this has inspired us during the visit and we believe that the newly opened hotel has set new standards in the regional hotel industry, where nothing has been left to chance

The advantage of the location is the proximity to the Vienna Kunstforum, where these days you can fill the soul with the Eyes Wide Open photographic exhibition of (the exhibition has finished on 13 July). A remarkable storyteller of timeless stories, just as is the case of the superior hotel, which we have enthusiastically experienced in Vienna.