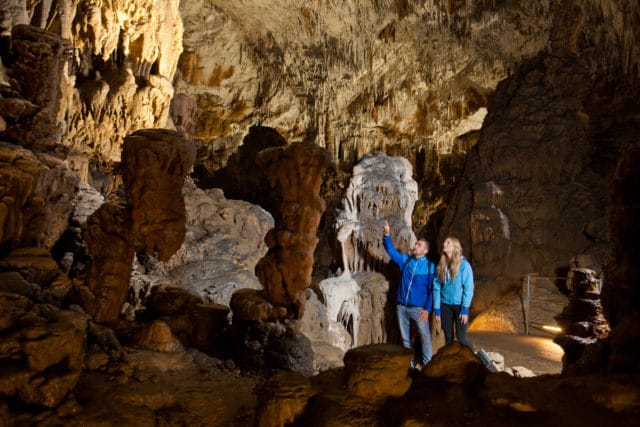 The Škocjan Caves are still the only natural monument in the area of Slovenia and the Classical Karst region to have been included on UNESCO’s World Heritage List. This gives them a place of honour among the natural monuments of the world.

Archaeological research has shown that humans have lived in and around the caves since the distant past; from the Mesolithic and the Neolithic, through the bronze and iron ages, throughout Antiquity and the medieval period and even up to now—more than 5000 years. Evidence has been discovered in the area that even in prehistoric times, the Škocjan Caves had not just local, but at the very least regional significance. This territory is also where fundamental research of the Karst landscape and phenomena first started back in the 19th century. This is where the international geomorphological terms Kras and dolina originated.

Rare and endangered bird species, as well as several species of bats, have made sinkholes and their vicinity their home; due to the specific geomorphological and microclimatic conditions, a remarkable ecosystem has developed and been preserved here, where Mediterranean, Sub-Mediterranean, Central European, Illyrian, and Alpine flora co-exist. The subterranean cave system of the river Reka is also a habitat for rare cave-dwelling animals.

Since 2003, natural science-focused field trips to the park have been conducted. Despite being primarily intended for groups of school pupils, they are also a magnificent experience for organised company groups. A circuit trail through the heart of the park leads past the foremost natural and cultural landmarks in the area. Along the way you will be constantly encountering various karst phenomena, the most prominent of which are:

The Škocjan Caves are the most important subterranean phenomenon in Karst, as well as in Slovenia. Indeed, they are one of the most important cave systems in the world. People have always been fascinated and attracted by the deep gorge, at the end of which the Reka river disappears into the underworld, as well as by the mysterious cave entrances. The river disappears into a sink under a cliff, at the top of which lies the village that gives the caves their name: Škocjan.

The Hague set to host the International Congress on Industrial and...

Evonik builds on the digital event expertise of VOK DAMS